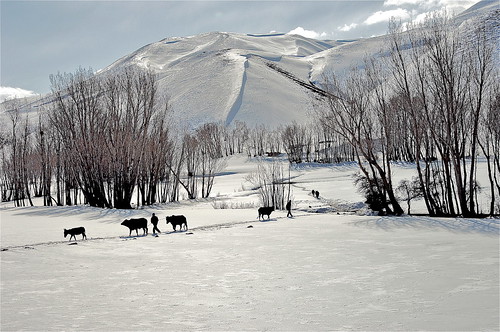 For hundreds of years, people in Afghanistan have stockpiled winter snows in specially-dug pits so they can use it during the scorching summer months.

Now, residents and officials in the mountainous southeastern province of Khost say storing and selling snow could provide a viable alternative to the illegal logging which has severely depleted local forests.

Deforestation is a major problem in Afghanistan. More than 30 years of conflict has left woodland areas devastated as people cut timber to sell or use themselves. Many loggers say they have no other means of earning an income.

A resident of Spera district said that the tradition of livestock raising has suffered as soil damage caused by deforestation means there is nowhere left to graze animals.

Fateh Khan, a resident of Mangal district, said that he is one of many people in the area who have abandoned illegal logging in recent years to store and sell snow.

He now transports and sells several truckloads of snow to the provincial capital every year, and says the business is going well, with last season particularly profitable.

“Previously, I would cut down trees in the forest and sell the timber, but I wouldn’t make as much profit as I make selling snow. I make 10,000 to 12,000 dollars profit every year in the snow business,” Khan said, adding that although the work was hard, it was preferable to chopping wood or having to seek employment abroad.

In Khost province, about half the 1,300 square-kilometer forested area has been lost. Agricultural and environmental protection officials in the province estimate that the pace of deforestation could be slowed by between 10 and 30 percent if people in mountain areas turned to selling snow, and they want a national strategy to be put in place to promote this.

A survey carried out by German experts found that in Khost, Paktia and Paktika provinces have lost nearly 75 percent of the forested area recorded in 1978.

Although the Afghan constitution says that forests belong to the state, stopping over-exploitation of them becomes almost impossible when the government’s reach is limited.

Local officials say they are trying a number of tactics to discourage illegal logging.

Abdul Ghias Jalatzai, the director of environmental protection in Khost, said, “Besides the snow business, we also want to implement plans to provide people with jobs like raising livestock, beekeeping and poultry farming so that they stop cutting down trees.”

Fazlullah Fazel, director of the Khost customs department, added that to discourage over-use of forests, an extra tax of US$2 per meter was levied on timber used to make doors and window frames.