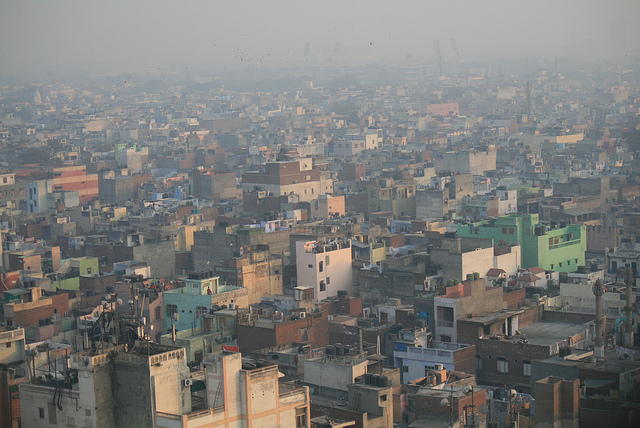 Poorest Cities Have the Most Polluted Air
GENEVA, Switzerland, May 12, 2016 (ENS)

More than 80 percent of the people living in urban areas that monitor air pollution are exposed to air quality levels that exceed the World Health Organization (WHO) limits, the UN’s health agency said in a new report today.

All regions of the world are affected, but populations in low-income cities suffer the worst effects.

Some 98 percent of cities in low- and middle income countries with more than 100,000 inhabitants do not meet WHO air quality guidelines.

In high-income countries, that percentage decreases to 56 percent.

In the past two years, the database has nearly doubled, with more cities measuring air pollution levels and recognizing the associated health impacts.

Ambient air pollution, made of high concentrations of small and fine particulate matter, is the greatest environmental risk to health, causing more than three million premature deaths worldwide every year.

As urban air quality grows worse, the risk of stroke, heart disease, lung cancer, and chronic and acute respiratory diseases, including asthma, increases for the people who live in these cities.

PM10 and PM2.5 include pollutants such as sulfate, nitrates and black carbon, which penetrate deep into the lungs and into the cardiovascular system, posing the greatest risks to human health.

Most sources of urban outdoor air pollution are beyond the control of individuals and demand action by cities, as well as national and international policymakers to promote cleaner transport, more efficient energy production and waste management.

But it is possible for cities to clear the air. More than half of the monitored cities in high-income countries and more than one-third in low- and middle-income countries reduced their air pollution levels by more than five percent in five years.

Reducing industrial smokestack emissions, increasing use of renewable power sources, like solar and wind, and prioritizing rapid transit, walking and cycling networks in cities are among the suite of available and affordable strategies.

During the World Health Assembly, May 24-30, Member States will discuss how to counter the adverse health effects of air pollution.