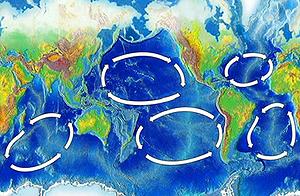 Marine scientists set sail from Bermuda on Thursday to document the extent of plastic pollution in the North Atlantic Gyre, a swirling vortex of ocean currents in the northern Atlantic Ocean. The scientists and crew are aboard the 72-foot sloop Sea Dragon sailing across the Sargasso Sea to the Azores Islands.

The husband and wife team of California researchers, Dr. Marcus Eriksen and Anna Cummins, are the first to study the plastics that accumulate in all of the world's five oceanic gyres. The gyres are formed by winds and currents in North and South Atlantic, the North and South Pacific and the Indian oceans.

In these gyres, plastic food and water containers, toys, plastic bags, six-pack rings, condoms, fishing lines and nets discarded on land or at sea float and whirl endlessly, breaking down into smaller and smaller pieces but never completely disappearing.

"The question we're now looking into - do the chemicals on the surface of plastic particles get into the tissues of fish through ingestion, work their way up the food chain, and wind up on our dinner plate?" the Eriksen and Cummins told ENS in an interview.

"Plastic particles at sea act as magnets for chemicals like DDT, PCBs, flame retardants and other pollutants," says Eriksen.

"Plastic particles can absorb chemicals that are "hydrophobic," that is they don't mix with water, but are "lipophilic," that is they are attracted to oily substances, such as petroleum-based plastics," he explains.
"Pollutants like PCBs, DDT, flame retardants, pesticides, and other hydrophobic persistent organic pollutants can stick to plastic particles at high concentrations - up to a million times higher concentration than the seawater around them," Eriksen says.

"This is where plastic pollution can impact humans. We find plastic particles in the stomachs of fish that may mistake plastic for food, or be attracted to fish eggs or barnacles growing on pieces of trash," the scientists said.
Eriksen and Cummins are sailing the Sargasso Sea now because while the seas are rougher in winter, the summer brings hurricanes, a greater danger.

Sailing out into the Atlantic, Eriksen and Cummins dropped their first collection trawl into the water and did not have to wait long for plastic debris to accumulate.

They caught shredded plastic film, a milk jug ring, random pieces of plastic confetti, and nurdles, the scrap plastic resin pellets from production of plastic goods. At least 27 million tonnes of nurdles are manufactured annually in the United States.

While potential human health effects of marine plastic remain unknown, scientists estimate that nearly half of all seabird species, all sea turtle species, and 22 species of marine mammals are harmed or killed by plastic waste, either from ingestion, entanglement or strangulation before the debris has been broken down into tiny fragments.