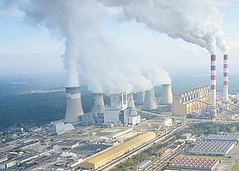 Germany and the UK tie for top polluting country, with nine of the dirtiest coal plants each, finds the report.

By far the dirtiest of the 30 power plants named in the report is Poland’s Bełchatów power plant, the largest thermal power station in Europe, fourth largest in the world. The 5,053 megawatt lignite-fired power plant is situated near Bełchatów in south-central Poland. Owned and operated by PGE Elektrownia Bełchatów S.A., it produces 20 percent of Poland’s total power generation.

This year’s “Europe’s Dirty 30″ report was published jointly by: Climate Action Network Europe, Climate Alliance Germany, the European Environmental Bureau, the Health and Environment Alliance and the global conservation organization WWF, which started this series of reports in 2007.

Co-author Kathrin Gutmann, coal policy officer at Climate Action Network Europe, said, “Coal-fired power plants are the single biggest global source of greenhouse gas emissions. CO2 emissions from coal in the EU are still far too high, as shown by the EU’s ‘Dirty 30 power plants.’ The EU needs to tackle coal head on, if it wants to successfully meet its own long-term climate targets.”

The EU’s coal problem, the report shows, is caused by the increased use of existing coal assets rather than a net increase in the number of coal plants. Many of the EU’s coal-fired plants are now running at or near full capacity, due to the relatively low price of coal compared to gas.

This has led to an increase in CO2 emissions from coal power plants across Europe, despite the rapid expansion of renewables and an overall decrease in total EU greenhouse gas emissions.

The heavy use of coal in some of the EU Member States with the highest populations, such as the UK and Germany, puts the EU in grave danger of not phasing out emissions from coal quickly enough, undermining the EU’s climate ambitions.

Darek Urbaniak, energy policy officer at WWF European Policy Office, said, “What the EU needs to end its coal addiction are three ambitious targets to cut greenhouse gases, and boost energy efficiency and renewable energy. A structural reform of the ailing EU ETS [Emissions Trading System] as well as the introduction of an Emissions Performance Standard for CO2 emissions from the power sector are also key in order to prevent lock-in of the most-polluting power infrastructure,” he said.