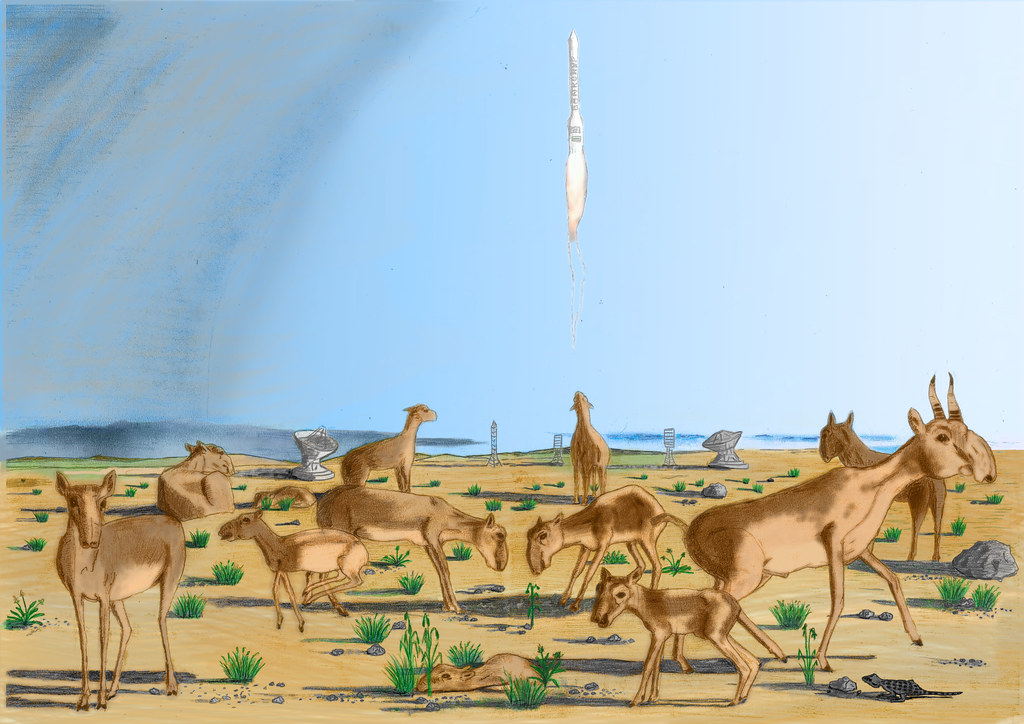 The saiga antelope is a unique mammal in Eurasia. It is the only remaining grazer adapted to the harsh environment of the eurasian cold steppe. It usually lives in herds and migrates through the steppe to find pastures.

The most striking feature of the saiga antelope is its strange nasal shape. According to scientists, the swollen nose results from an adaption to the steppe harsh environment: The nose filters the dust particles during summer, while it allows warming and moistening of dry cold air during winter time.

Only male antelopes have horns. These horns have been used in Chinese traditional medicine until recent times. 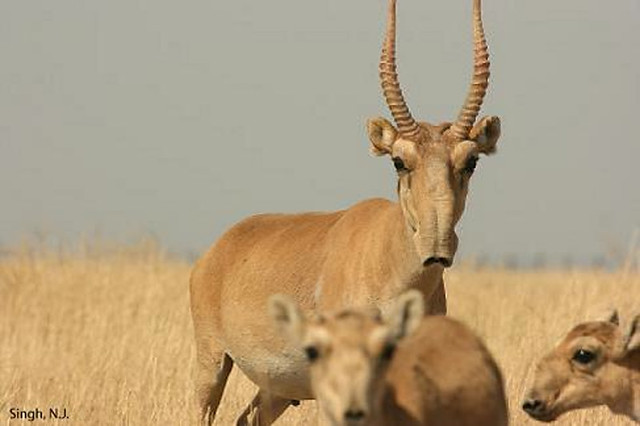 The current remaining saiga populations live in Russian Kalmukya, Kazahkstan as well as in two distinct areas of Mongolia. The Kazahk population can migrate to the south and southwest so that it can also be present in Uzbekistan and Turkmenistan.

The Mongolian population is considered to be a distinct subspecies called Saiga tatarica mongolica.

During recent history, saiga antelopes once lived further west as there were recorded populations in the Carpathian Mountains, around the Black Sea and in Northern Caucasus until the beginning of the 18th century.
Fossil records from saiga bones concluded that during ice ages the saiga’s biotope reached as far West as the British Isles. These grazers were part of Neanderthals diet along other large mammals (Stephen Tomkins, The Origin of Humankind Cambridge University Press)

As animals relying exclusively on the availability of steppic grass, saiga antelopes are very sensitive to climate variations. Any unusually warm and dry summer or any harsh winter will have a direct impact on their food supply. The population therefore fluctuates continuously. This is particularly visible during springtime as females often give birth to 2 calves. 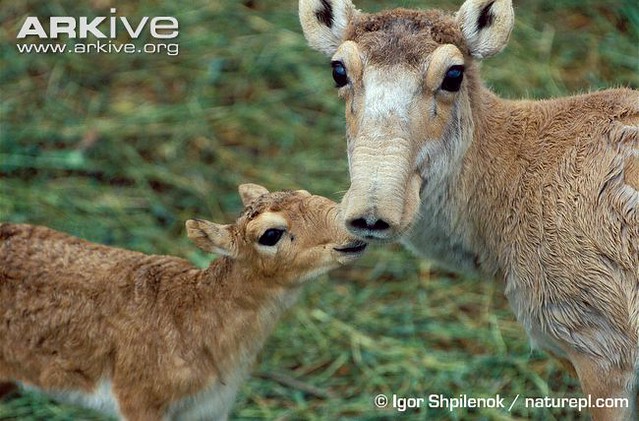 A successful conservation program started in the 1920’s…

The saiga antelope is on the critically endangered list today. Nevertheless the saiga antelope started to be protected in the 1920’s through a conservation program under the soviet administration. Conservationists had noticed the dwindling population leading the government to take drastic measures. Hunting was banned and the populations were monitored so that they could recover. It was one of the first successful conservation program as in the 1950’s large herds of antelopes could be seen again, allowing some controlled hunting. The global population is said to have reached over 2 million and remained high until the dismantling of the former Soviet Union. However, it has always been noticed that the population highly fluctuates from one year to the other, prompting the government to adjust the hunting quotas to the actual antelope populations.

The dismantling of the Soviet Union had some direct impacts on the future of the species. The habitat of the antelope, once part of a single country became divided between several young nations. The monitoring put in place under the Soviet Union was abandoned and replaced by local monitoring. In addition, new nations did not always put their priority on conservation programs, but rather had to cope with political and development challenges.

Nations such as Kazakhstan, with large territories suitable for the saiga have favoured lucrative economical development (oil and gas extraction) rather than environment protection. Relapse of anti-poaching monitoring lead to an increase of illegal hunting for meat and horns, fuelling a lucrative black market for Chinese medicine.

Despite having a historical range covering Central Asia, still one of the less populated areas in the world, the saiga antelope has been the victim of human pressure, reducing its population by roughly 95% in just 15 years.

Nations in which the saiga antelope is present signed a memorandum of understanding on the 24th of September 2006. It aims at developing a joint and sustainable conservation policy for this mammal.

It has been signed by Uzbekistan, Turkmenistan, Mongolia, Kazakhstan and the Russian Federation under the auspices of the United Nations (Convention on Migratory Species).

The memorandum roadmap implies an increased coordination in the region to better estimate the populations and their viability. Though an increased control of poaching is put in place, development programs in local communities involved in poaching are a key element in the success of this roadmap.

This memorandum clearly aims at making saiga populations thrive again while allowing possible use of these animals in a sustainable way in the future.

It is now illegal to hunt the saiga antelope in all countries where it still lives.
There are some encouraging signs of stabilization or slight increases of local populations. However, the global situation still remains fragile. Saiga populations are sensitive to factors other than human pressure, including pests, climate variations and local lack of genetic diversity.

Despite living in territories with some of the lowest human densities in the world, saiga antelopes are hindered by large industrial projects such as oil and gas extraction (pipeline constructions, fences) and a complex geopolitical context (borders, no single international policy for saiga protection until the Saiga Antelope MOU).

Herds of saiga antelopes are a cheap source of meat available for local communities.

China’s economical growth has fuelled a higher demand for saiga horns by a wealthier population.

Combined with the two main local factors of poaching for meat, it has had a direct impact on illegal hunting.

Compared to poaching for meat, poaching for traditional medicine also has an obvious impact on the sex ration balance. Since only the males have horns, scientists have noticed that remaining populations have extremely low numbers of mature males. Sex ratios of 1 to 10 males for 100 females can now be observed among mature individuals. This further impairs the reproduction success of this endangered mammal. 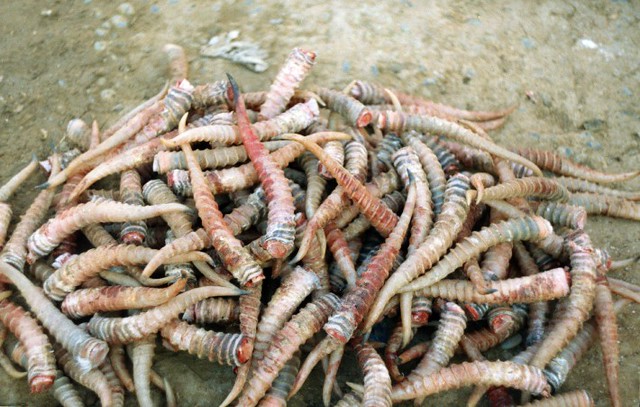 Why saiga antelopes are so important:

The saiga antelope is an essential actor of the steppe biotope. As a grazer, it contributes to the diversity of the steppe flora by controlling the growth of different grass species. It is a source of food not only for humans, but also for the steppe predators (wolf, lynx).

They are a living testimony of a wider range of big mammals that once roamed in the cold Eurasian steppe. During the last ice age, they once migrated in large herds within this region along with mammoths, woolly rhinos and bisons.

In order to give saiga antelopes a chance, we should: