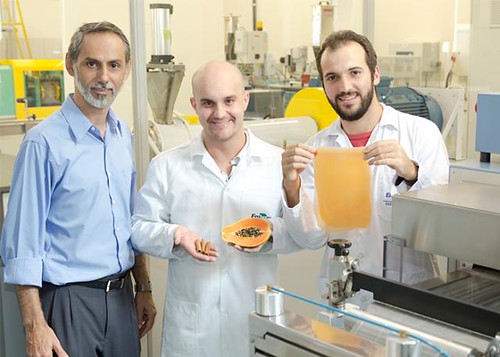 Imagine putting a pizza in the oven without having to remove the plastic casing that protects the pizza from contamination. The plastic film consists of tomatoes and, when heated, it will become part of the pizza.

This edible plastic has been developed by researchers at the Brazilian Agricultural Research Corporation, Embrapa Instrumentation, a state-owned company affiliated with the Brazilian Ministry of Agriculture.

In fact, the researchers have made edible plastic films from foods such as spinach, papaya and guava as well as tomatoes.

“We can use the waste food industry to manufacture the material. This ensures two features of sustainability: the use of food waste and replacing synthetic packaging that would be discarded,” says the coordinating scientist on the project, Luiz Henrique Capparelli Mattoso.

Mattoso says that Embrapa’s work to develop plastic films from tropical fruits is a world first.

The material has physical features similar to conventional plastics, such as resistance and texture, and is equal in its ability to protect food.

The fact that it can be eaten opens a vast field to be explored by the packaging industry. Mattoso pictures spiced wrapping material for poultry, and soup packages that can dissolve with their contents in boiling water.

The edible plastic is made of dehydrated food mixed with a nanomaterial which has the setting function.

“The greatest challenge of this research was to find the ideal formulation, the recipe of ingredients and proportions so that the material had the features we needed,” says materials engineer José Manoel Marconcini, an Embrapa researcher who participated in the work.

He explains that the food used as the feedstock passes through a type of dehydration in which, after the food is frozen, all the water contained in it turns from a solid state directly into gas, without passing through the liquid phase.

The result is a completely dehydrated food with the advantage of keeping its nutritional properties.

It can be applied to many different foods such as fruits, vegetables, legumes and even some types of seasonings, which explains the great diversity of edible raw materials that can flavor and color the plastic.

The development of the edible plastic material was the result of work that started two decades ago, when Mattoso began his studies in materials science at Embrapa.

“In the beginning, the concern was to use materials from renewable sources studying alternatives to synthetic polymers derived from petroleum,” recalls Mattoso. To accomplish this, the group began to add natural fibers to synthetic plastics, generating composites with the two types of raw material.

Sisal, cotton, jute, coir and bagasse were some natural fibers tested. Mattoso says that in laboratory testing they were more resistant to traction and impacts, in addition to being up to three times stronger than the 100 percent synthetic polymers.

Before discovering how to make edible plastic, the research team developed biodegradable polymers, driven by the demand for packaging easily absorbed into the environment in a short time.

Finally, they arrived at edible plastic, after incorporating higher standards of safety and hygiene in the manufacturing process.

Now the scientists have increased the food’s shelf life by adding added chitosan, an antibacterial polysaccharide found in the exoskeletons of crabs. This natural molecule has antibacterial properties which can extend the length of time food can remain fresh on the shelf.