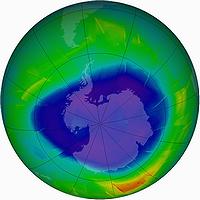 The Montreal Protocol on Substances That Deplete the Ozone Layer today became the first environmental treaty to attract universal participation by all the 196 governments of the world.

Today, Xanana Gusmao, Prime Minister of the world's youngest nation, East Timor, or Timor-Leste, made environmental history with his announcement that his government has ratified the treaty, bringing the number of participating states to 196.

"Timor-Leste is very pleased to be joining the rest of the world in the fight against the depletion of the ozone layer and the effort towards its recovery," Gusmao said.

The announcement comes on the United Nations International Day for the Preservation of the Ozone Layer, which marks the day 22 years ago that the protocol was opened for signature.

The protocol to the Vienna Convention for the Protection of the Ozone Layer entered into force on January 1, 1989 and has been revised seven times. Due to its widespread adoption and implementation, the Montreal Protocol has been hailed as an example of exceptional international cooperation.

"The ratification by Timor-Leste makes this special day even more special and a signal that when the world fully and wholly unites around an environmental challenge there can be multiple and transformative effects, said Achim Steiner, executive director of the UN Environment Programme.

Established to phase out pollutants damaging the layer of stratospheric ozone that shields the planet from the Sun's damaging ultraviolet rays, the treaty will within a few months place close to 100 chemicals linked to ozone damage on the list to be retired.

"Without the Montreal Protocol and its Vienna Convention, atmospheric levels of ozone-depleting substances would have increased tenfold by 2050 which in turn could have led to up to 20 million more cases of skin cancer and 130 million more cases of eye cataracts, not to speak of damage to human immune systems, wildlife and agriculture," Steiner said.

The annual ozone hole has started developing over the South Pole, and scientists say it will be comparable to ozone depletions over the past decade.

"We have observed the ozone hole again in 2009, and it appears to be pretty average so far," said ozone researcher Paul Newman of NASA's Goddard Space Flight Center in Greenbelt, Maryland. "However, we won't know for another four weeks how this year's ozone hole will fully develop."

Recent observations and several studies have shown that the size of the annual ozone hole has stabilized and the level of ozone-depleting substances has decreased by four percent since 2001. But since chlorine and bromine compounds have long lifetimes in the atmosphere, scientists say a recovery of atmospheric ozone is not likely to be noticeable until at least 2020.

These gases are used as refrigerants, flame retardants, solvents, foam blowing agents, and in the case of methyl bromide, as a pesticide and fumigant.

These substances are generally very stable in the lower atmospheric levels and only degrade under intense ultraviolet light in the stratosphere. When they break down, they release chlorine or bromine atoms, which then deplete the ozone layer.

Global observations have verified that atmospheric levels of key ozone-depleting substances are diminishing. Scientists believe that due to their phase-out under the Montreal Protocol, the ozone layer should return to pre-1980 levels in the period between 2050 and 2075.

Because most ozone depleting substances are also potent global warming gases, the actions taken under the Montreal Protocol have contributed to the global effort to address climate change.

"By some estimates," said Steiner, "the phase-out of ozone-depleting substances has since 1990 contributed a delay in global warming of some seven to 12 years, underlining that a dollar spent on ozone has paid handsomely across other environmental challenges."

Marco Gonzalez, executive secretary of the Ozone Secretariat, said the focus is now switching from the gases such as CFCs that were phased out earlier to the dangers of their replacements, the HCFCs and HFCs.

In 2007, governments agreed to accelerate the freeze and phase-out of HCFCs because of their climate change impacts.