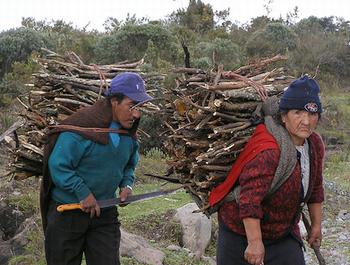 Energy poverty is an issue that must be addressed at the upcoming climate change summit in Copenhagen say top United Nations experts on public health and development.

"Almost half of humanity is completely disconnected from the debate on how to drive human progress with less emissions and greener energy because their reality is much more basic than that," said Olav Kjorven.

"They carry heavy loads of food and water on their backs because they don't have transport. They cook with wood fires that damage their health," Kjorven told reporters at the launch of a new UN study, entitled, "The Energy Access Situation in Developing Countries.

" The study, jointly carried out by the UN Development Programme and the World Health Organization, points out that currently over one billion people in world have no access to electricity and that 80 percent of them live in South Asia and Sub-Saharan Africa.

Slashing global poverty in half by 2015 - the first of eight internationally agreed Millennium Development Goals ?is unlikely to be achieved if hundreds of millions of people across the world continue to live without electricity and modern fuels, according to the new report.

Environmental sustainability is one of the eight goals. UNDP's Kjorven and WHO officials hold that expanding energy access is essential to tackle global poverty and spread of HIV/AIDS, malaria and other deadly diseases.

In their report, authors Maria Neira and Veerle Vandweerd note that, while there are no Millennium Development Goals on energy, "The global aspirations embodied in the goals will not become a reality without massive increases in the quantity and quality of energy purposes.

" "This is needed to meet basic needs of poor men and women, especially heat for cooking, and mechanical power," they wrote in the report's foreword, stressing that improved energy technologies can prevent unnecessary deaths.

Every year nearly two million people in poor countries die due to indoor air pollution from solid fuel use. The authors say that in poor countries, especially in sub-Saharan Africa, half of all deaths from pneumonia and lung diseases occur due to the use of solid fuel.