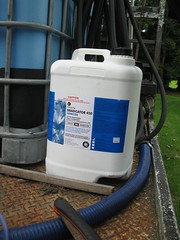 Glyphosate, the world’s most widely used herbicide, has been classified as a “probable human carcinogen” by the International Agency for Research on Cancer, an agency within the World Health Organization.

The new classification emerged from a meeting of 17 experts from 11 countries earlier this month at the International Agency for Research on Cancer, IARC, in Lyon. The experts met to assess the carcinogenicity of five organophosphate pesticides: tetrachlorvinphos, parathion, malathion, diazinon, and glyphosate.

Their conclusions were published in the current issue of the British medical journal “The Lancet.”

Glyphosate is a broad-spectrum herbicide, currently with the highest production volumes of any herbicide in the world. It is used in more than 750 different products for agriculture, forestry, urban, and home applications.

The publicly-traded American multinational agrochemical and agricultural biotechnology company Monsanto brought glyphosate to market in the 1970s under the trade name Roundup.

Its use has increased sharply with the development of genetically modified glyphosate-resistant crops by Monsanto and others because it allows farmers to kill weeds without killing their crops.

In 2007, glyphosate was the most used herbicide in the U.S. agricultural sector, with roughly 84,000 tons applied – most commonly to genetically engineered corn, soybeans, cotton, and sugar beets. It is the second-most used herbicide in the U.S. home and garden market with about 3,600 tons applied. In addition, industry, commerce, and government in the United States applied approximately 6,800 tons that year.

The IARC expert group said “glyphosate has been detected in air during spraying, in water, and in food.”

“Glyphosate has been detected in the blood and urine of agricultural workers, indicating absorption,” the IARC experts wrote in “The Lancet” article.

There was “limited evidence in humans for the carcinogenicity of glyphosate,” the experts said. They cited case-control studies of occupational exposure in the United States, Canada, and Sweden that reported increased risks for non-Hodgkin lymphoma that persisted after adjustment for other pesticides.

Monsanto, which sells Roundup Ready genetically engineered seeds as well as the herbicide itself, reacted with anger to the IARC classification.

“We are outraged with this assessment,” said Dr. Robb Fraley, Monsanto’s chief technology officer. “This conclusion is inconsistent with the decades of ongoing comprehensive safety reviews by the leading regulatory authorities around the world that have concluded that all labeled uses of glyphosate are safe for human health. This result was reached by selective ‘cherry picking’ of data and is a clear example of agenda-driven bias.”

The U.S. Environmental Protection Agency says, “There is inadequate evidence to state whether or not glyphosate has the potential to cause cancer from a lifetime exposure in drinking water.”

However, the EPA has found congestion of the lungs and an increased breathing rate can result from acute exposures at levels above the Maximum Contaminant Level, MCL.

“Glyphosate has the potential to cause the following health effects from long-term exposures at levels above the MCL: kidney damage, reproductive effects,” the EPA says in a technical fact sheet.

“IARC has no regulatory authority and its decision does not impact glyphosate’s label, current registration or use,” Monsanto said in a statement Monday.

The IARC conclusion should be taken seriously by the U.S. Environmental Protection Agency, farmers, and industry, warns the Center for Science in the Public Interest, a nonprofit health advocacy group based in Washington, DC focused on nutrition and food safety policies.

“Considering that farmers use millions of pounds of glyphosate each year, the EPA should ensure that the herbicide only be used in ways that do not endanger farmers, consumers, or farm animals,” said CSPI Biotechnology Director Gregory Jaffe.