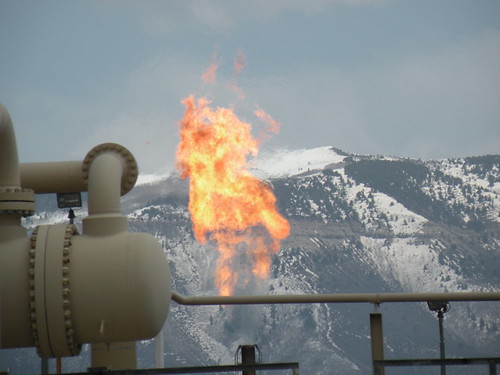 For the first time, chief executives of major oil companies joined today with senior government officials from oil-producing countries in an agreement to end the practice of routine gas flaring at oil production sites by 2030 at the latest.

Flaring of natural gas around the world is harming the environment and wasting a precious source of energy, which could instead be used in productive ways like providing millions of people with electricity.

Every year, around 140 billion cubic meters of natural gas produced together with oil is wastefully burned or “flared” at thousands of oil fields around the world. This results in more than 300 million tons of CO2 being emitted to the atmosphere – equivalent to emissions from approximately 77 million cars.

If this amount of associated gas were used for power generation, it could provide more electricity (750bn kWh) than the entire African continent is consuming today. But currently, the gas is flared for a variety of technical, regulatory, and economic reasons, or because its use is not given high priority.

By endorsing the initiative, governments, oil companies and development institutions recognize that routine gas flaring is unsustainable from a resource management and environmental perspective and agree to cooperate to eliminate ongoing routine flaring as soon as possible and no later than 2030.

They will publicly report their flaring and progress towards the target on an annual basis.

They agreed that routine flaring will not take place in new oil fields developments. Governments will provide an operating environment conducive to investments and to the development of functioning energy markets.

Russia’s Deputy Minister of Energy Kirill Molodtsov said, “The Ministry of Energy of the Russian Federation shares the World Bank concerns about associated petroleum gas flaring. In addition to being a waste of a finite natural resource, flaring of produced gas releases harmful substances into the atmosphere, which change the composition of the atmosphere every year.”

Kim said the World Bank has been active on this issue for 15 years, as a founding member of the Global Gas Flaring Reduction Partnership. The Bank works with its partners in GGFR and the United Nations Sustainable Energy for All initiative to increase the use of associated gas by helping remove the technical and regulatory barriers to flaring reduction.

Oil companies and governments that have yet to endorse the initiative are currently undertaking comprehensive reviews of their gas flaring. Many are expected to join the initiative in the coming months.