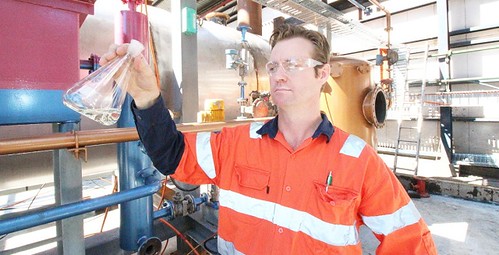 The facility will turn discarded non-recyclable household plastics into diesel, gasoline and the electricity needed to power the facility.

Foyson Resources is behind the new A$4 million facility at Berkeley Vale, about 90 kilometers north of Sydney on Australia’s east coast.

Based in North Sydney and publicly traded on the Australian Stock Exchange, Foyson Resources is engaged in the exploration and development of gold, copper, and molybdenum deposits in Papua New Guinea.

This technology subjects shredded plastic to a high temperature heat stream – above 400 degrees Celsius – in the absence of oxygen. This causes the polymer to break down into smaller molecules, forming gas and liquids which resemble crude oil.

The liquids are fractionated into hydrocarbons in the form of gasoline, kerosene and diesel fuel.

The road-ready fuels that have been produced will be independently tested and evaluated, Foyson said in a statement May 18.

IGE’s waste to energy technology is a self-powered process and produces no harmful emissions, significant noise or visual problems, the company says.

Foyson Managing Director Mike Palmer told the Australian Broadcasting Corp., “The 200 tonnes a day, we produce less than a ton of waste material and that waste material is essentially silica or sand, so there’s nothing environmentally unpleasant about that product. And we also produce natural gas, which we can either flare off or it itself can be sold to local energy consumers.”

But Jeff Angel, executive director of the environmental group Total Environment Centre, believes the needs of the Berkeley Vale plant will cut into the supply of recyclable plastics that could be turned into useful plastic items.

Palmer answers that 95 percent of the material to be processed at the Berkeley Vale facility will be non-recyclable plastic, with a small amount of recyclable plastic getting into the mix only because the waste sorting system is not perfect.

IGE has secured two contracts that will supply the plastic feedstock requirements of the Berkeley Vale plant for the first three years to June 2018, as throughput increases from 50 tonnes per day (tpd) to 200 tpd, by the scheduled installation of three more production modules.