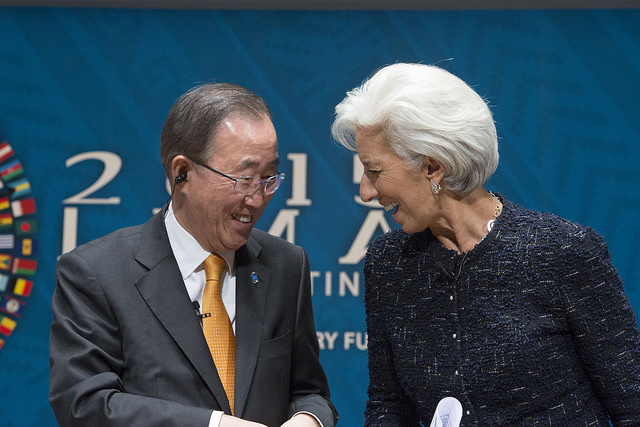 Global carbon pricing is an idea whose time has come, heads of government said in a joint declaration today, urging their peers to set up carbon markets and tax carbon emissions ahead of climate talks in Paris in December.

For the first time, a statement urging countries and businesses around the world to put a price on carbon was issued by national leaders from Europe, Africa, Asia, South and Central America, in an effort to control dangerous climate change.

President Kim said, “There has never been a global movement to put a price on carbon at this level and with this degree of unison.”

“It marks a turning point from the debate on the economic systems needed for low carbon growth to the implementation of policies and pricing mechanisms to deliver jobs, clean growth and prosperity,” said President Kim.

The panel hopes to spur faster action ahead of the Paris climate talks November 30 – December 11. There, world leaders are expected to sign a legally-binding, universal agreement limiting greenhouse gas emissions to hold global warming to 2 degrees Celsius above pre-industrial levels. The conference is known as COP21, as it is the 21st Conference of the Parties to the UN Framework Convention on Climate Change.

These corporate entities will help link business needs with public policies through the Carbon Pricing Leadership Coalition, an action-based platform that will be launched in Paris on November 30.

The panel’s carbon pricing statement comes as a part of a last week of pre-Paris discussions in Bonn that ends October 23. The meeting aims to agree the language of the global climate change agreement for the Paris conference.

A draft of the agreement to be approved in Paris currently excludes language on carbon pricing because some countries are opposed to the use of markets to address climate change.

During his visit to the United States on September 25, Chinese President Xi Jinping announced that in 2017 China will start its national emission trading system, covering key industry sectors such as iron and steel, power generation, chemicals, building materials, paper-making, and nonferrous metals.

With 1.4 billion people, China is the world’s most populous country and the number one greenhouse gas emitter. The United States is number two.

An emissions trading system works on the cap and trade principle. A cap, or limit, is set on the total amount of certain greenhouse gases that can be emitted by the factories, power plants and other installations in the system. The cap is reduced over time so that total emissions fall.

Within the cap, companies receive or buy emission allowances which they can trade with one another as needed. They can also buy limited amounts of international credits from emission-saving projects around the world.

Around the world, about 40 nations and 23 cities, states and regions have implemented or are putting a price on carbon, with programs and mechanisms covering about 12 percent of global greenhouse gas emissions.

The number of implemented or scheduled carbon pricing instruments has nearly doubled since 2012, reaching an aggregate market value of about $50 billion.

The EU emissions trading system (EU ETS) is a cornerstone of the European Union’s policy to combat climate change and its key tool for reducing industrial greenhouse gas emissions cost-effectively.

The first, and still the biggest, international system for trading greenhouse gas emission allowances, the EU ETS covers more than 11,000 power stations and industrial plants in 31 countries, as well as airlines.