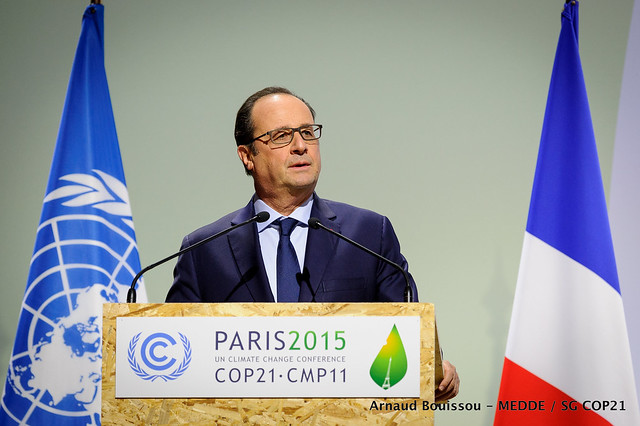 Opening the 21st Conference of the Parties (COP 21) to the United Nations Framework Convention on Climate Change, UN Secretary-General Ban Ki-moon addressed 143 heads of state and government and thousands of delegates assembled at the Paris–Le Bourget Airport, seven miles outside of Paris.

“I urge you to instruct your negotiators to choose the path of compromise and consensus. Bold climate action is in the national interest of every single country represented at this conference,” declared Ban. “The time for brinksmanship is over.”

“Let us build a durable climate regime with clear rules of the road that all countries can agree to follow. Paris must mark a turning point. We need the world to know that we are headed to a low-emissions, climate-resilient future, and that there is no going back,” said the UN leader, who has criss-crossed the globe tirelessly for years to bring about an all-inclusive, legally-binding agreement to limit greenhouse gas emissions.

“The national climate plans submitted by more than 180 countries cover close to 100 percent of global emissions,” said Ban. “This is a good start. But we need to go much farther and much faster if we are to limit global temperature rise to below 2 degrees Celsius.”

“The science is clear. Even a 2-degree rise will have serious consequences for food and water security, economic stability and international peace,” stressed Ban. “That is why we need a universal, meaningful agreement here in Paris.”

France’s President François Hollande said COP21 will be a success if the outcome agreement determines a credible path to limit temperature rise below 2°C, or 1.5°C if possible. He stressed solidarity “so that no state can abstain from its commitments” expressed the hope that any agreement would mobilize all societies and sectors to act.

The world leaders then each stepped to the podium for their allotted three minutes. President Barack Obama said, “I’ve come here personally, as the leader of the world’s largest economy and the second-largest emitter, to say that the United States of America not only recognizes our role in creating this problem, we embrace our responsibility to do something about it.”

“Our understanding of the ways human beings disrupt the climate advances by the day. Fourteen of the 15 warmest years on record have occurred since the year 2000 – and 2015 is on pace to be the warmest year of all. No nation – large or small, wealthy or poor – is immune to what this means,” he said.

“This summer,” Obama shared, “I saw the effects of climate change firsthand in our northernmost state, Alaska, where the sea is already swallowing villages and eroding shorelines; where permafrost thaws and the tundra burns; where glaciers are melting at a pace unprecedented in modern times.”

“And it was a preview of one possible future,” he said, “a glimpse of our children’s fate if the climate keeps changing faster than our efforts to address it. Submerged countries. Abandoned cities. Fields that no longer grow. Political disruptions that trigger new conflict, and even more floods of desperate peoples seeking the sanctuary of nations not their own.”

That future is not one of strong economies, nor is it one where fragile states can find their footing. That future is one that we have the power to change. Right here. Right now. But only if we rise to this moment,” Obama said. “Let’s get to work.”

The United States and China, the world’s largest developed and developing countries, in total account for about 40 percent of all greenhouse gas emissions.

Chinese President Xi Jinping, who heads the largest greenhouse gas emitting nation, said that the Paris agreement should follow the principles of the UNFCCC, focus on its full implementation and “create institutional arrangements that compel concerted efforts.”

President Xi maintained that the Paris agreement must, “…respect differences in countries’ economic structures and capacities, and not deny the legitimate needs of developing countries to improve living standards and develop economically.”

Merkel called for a binding review mechanism with a five-year cycle to begin in 2020 to ensure credibility and increased ambition.

She also stressed decarbonization of economies and the “profound transformation of all industry sectors.”

She called on developed countries, “in recognition of their responsibility for past emissions,” to take the lead in funding technology “advancement.”

President Vladimir Putin said that Russia has not only met the requirements of the Kyoto Protocol, but has done even more. “We not only maintained the 1990 emission levels, we actually reduced them. At the same time,” he said, “we nearly doubled GDP during this period. In other words, it is possible to develop the economy while preserving the environment.

“And at the next stage, Russia will reduce emissions to 70 percent of 1990 levels, pledged Putin.