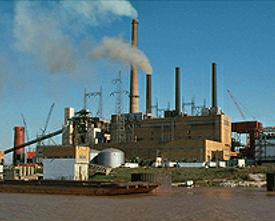 "I believe we've reached the stage where it is time for civil disobedience to prevent the construction [applause] of new coal plants that do not have carbon capture and sequestration," Al Gore declared at the opening session of the Clinton Global Initiative annual meeting this week at the Sheraton New York.

Coal-fired power plants emit the greenhouse gas carbon dioxide that is joining other heat-trapping gases in the atmosphere, blanketing the planet and raising the global temperature. Carbon capture and sequestration are methods of keeping the greenhouse gas out of the atmosphere, but the technology is in its infancy, and the only U.S. demonstration project, FutureGen, was halted by the federal government earlier this year.

The former U.S. Vice President and Nobel Peace Prize Laureate who woke the world up to the dangers of global warming with his film "An Inconvenient Truth," stepped up his warnings about the dire state of the global climate because he believes humans are losing the fight against global warming.

He drew a parallel between the economic crisis that the Bush administration and Congress are now trying to resolve, and the climate crisis - but he says the climate crisis will be much more disastrous if it is not prevented - and time is growing short.

"Now, in the midst of this frenetic effort to find a bailout, many are saying we should have prevented this. We should have realized that the short-term greed was overcoming a clear vision of what the risk was," said Gore.

"Well, now is the time to prevent a much worse catastrophe because the world has several trillion dollars in sub-prime carbon assets, based on the assumption that it is perfectly alright to put 70 million tons of global warming pollution into the atmosphere every 24 hours. Since we met here last year, the world has lost ground to the climate crisis. This is a rout," he warned. "We are losing badly."

"The strength of the storms, the depth of the drought, the movement of tropical diseases into areas that never experienced them before, this is the result of a dysfunctional, insane global system pattern that we have to change," Gore said.

For the first time in all of human history, we as a species, have to make a decision," he said, asking rhetorically, "What should we do?"

"We should stop burning coal [applause] without sequestering the CO2," said Gore, blaming the coal and oil companies for the climate crisis.

"The coal and oil companies have spent, in the United States alone, a half a billion dollars in the first eight months of this year promoting a lie that there is such a thing as clean coal," he said.

"There is a myth that the technology is not available. It is available," Gore said.

Gore said within 10 years the United States should have a good start on what he calls the Electronet, a unified, national "smart" power transmission grid "with long-distance, low-loss transmission capacity to take the energy from the places where the sun falls and the wind blows to the places where the people live."
Gore's solution for the climate and energy crisis may help resolve the humanitarian crisis in Darfur, Sudan as well.

"Let's start with Darfur," he proposed. "Darfur has more sunlight falling on it reliably than almost any other place. There's a belt across that part of Africa into the Middle East. We ought to build solar, electric plants there and connect them with a super grid that goes across the straits of Gibraltar and up through the Balkans and across the Mediterranean and replaces coal and oil."

"Today," he said, "the U.S. Congress is dealing with energy as well. They are, without debate and without a single hearing, preparing to lift the moratorium on the development of oil shale, which would vastly multiply the amount of CO2 from every gallon of gasoline. This is utter insanity and it demonstrates that the wealth and power and influence of the entrenched carbon lobby to twist policy and to put out illusory impressions about this that is overwhelming free debate."

An extension of the ban on oil shale production on federal lands in the West failed to pass the Senate on Friday. Unless Congress extends the moratorium, it expires at the end of September with the end of the current fiscal year.

The oil shale of the Green River geological formation in Colorado, Utah and Wyoming contains 800 billion to 1.8 trillion barrels of the equivalent of oil - roughly three times the size of Saudi Arabia's oil reserves.
Production of oil from shale will result in airborne pollutants and greenhouse gas emissions so worrisome that the U.S. Council of Mayors earlier this year passed a resolution against the purchase of petroleum products produced from shale.

Because the entire Green River formation lies in the Colorado River drainage basin, water quality is an important issue, and 2005 study by the RAND corporation warns that "not enough is known about how to prevent water contamination from surface and in-situ operations."

As for clean coal, the American Coalition for Clean Coal Electricity, an industry association, points out that coal provides half of America’s electricity generation.

"Over the last 30 years," the coalition says, "America's coal-based electricity providers have invested over $50 billion in technologies to reduce emissions ?while at the same time providing affordable, reliable electricity to meet growing energy needs."

But the greenhouse gas carbon dioxide is not a regulated emission, and the Bush administration has resisted all attempts by the states, business and environmental groups to regulate CO2.

In Gore's view, he explained to the high-powered audience at the Clinton Global Initiative, renewable and carbon-free sources of energy, conservation and efficiency are the only way the world can extricate itself from the climate crisis.

"The single most important thing we could do is to put a price on the CO2 in our economy today," said Gore. "As you know, I've long argued to reduce the payroll tax on working people and make it up with a tax on CO2. Tax what we burn, not what we earn."