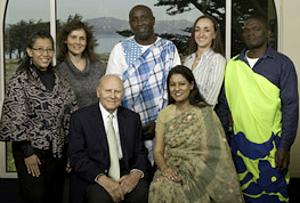 The 2009 Goldman Environmental Prize winners are grassroots environmental leaders from around the world who have fought mining companies, logging development, mounting piles of solid waste, toxic dumping and government indifference to tribal rights.

"This group of Goldman Prize recipients are as impressive as ever, taking on seemingly insurmountable struggles and achieving success," said Goldman Prize founder Richard Goldman.

The 2009 Goldman Environmental Prize winners are:

Africa: Marc Ona Essangui, Libreville, Gabon: In Gabon, a West African country without a culture of civic engagement, Marc Ona, who uses a wheelchair for mobility, is leading efforts to expose the unlawful agreements behind a Chinese mining project that threatens the ecosystems of Gabon's equatorial rainforests.

Europe: Olga Speranskaya, Moscow, Russia: Physicist Olga Speranskaya transformed the nongovernmental community in Eastern Europe, the Caucasus and Central Asia, EECCA, into a potent, participatory force working to identify and eliminate the Soviet legacy of toxic chemicals in the environment.

South and Central America: Wanze Eduards and Hugo Jabini, Pikin Slee Village and Paramaribo, Suriname: To fight logging on their traditional lands, Eduards, a tribal leader, and Jabini, a law student, have organized their Saramaka communities, leading to a landmark ruling for indigenous and tribal peoples throughout the Americas to control resource exploitation in their territories.

The Goldman Environmental Prize was established in 1989 by San Francisco civic leader and philanthropist Richard N. Goldman and his late wife, Rhoda H. Goldman. It has been awarded to 133 people from 75 countries.

Since receiving a Goldman Prize, eight winners have been appointed or elected to national office in their countries, including several who became ministers of the environment. The 1991 Goldman Prize winner for Africa, Wangari Maathai, won the 2004 Nobel Peace Prize.