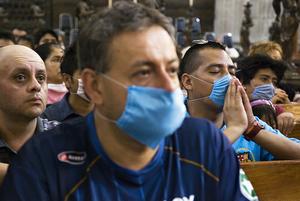 With increasing numbers of people contracting the deadly swine flu virus, the United Nations health agency today elevated the international pandemic alert to phase 4, on a six-point scale, for the first time since the warning system was introduced in 2005 in response to the avian influenza crisis.

The increase in the alert level signals an outbreak of human to human transmission in at least one country, which increases the risk of a global epidemic, but does not mean a pandemic is inevitable.

"Given the rapidly evolving situation [it was felt] that it was important to give a strong signal to countries that now is a good time to strengthen preparations for possible pandemic influenza," World Health Organization Assistant Director-General Keiji Fukuda told reporters in Geneva.

Fukuda explained that the emergency committee of health experts, set up to deal with the recent outbreak of the swine flu virus, raised the alert level because the virus had already spread to the United States, Mexico, and Canada, with a verified case in Spain.

On Saturday World Health Organization Director-General Margaret Chan said the outbreak of a deadly new strain of swine flu has the potential to become a pandemic. The animal virus has begun infecting people, giving it pandemic potential.

The virus is being described as a new subtype of A/H1N1 not previously detected in swine or humans. It is a respiratory disease of pigs that can be transmitted to humans and passed from human to human. It is not transmitted by eating pork.

Symptoms of the new influenza virus are similar to those of other types of flu - sudden temperature of over 39°C, intense headache, cough, sore throat, body aches, chills and fatigue. Some people have reported diarrhea and vomiting as well.

In response to cases of swine flu A/H1N1, Dr. Chan Saturday convened a meeting of the WHO Emergency Committee to assess the situation and advise her on appropriate responses. Committee members identified a number of gaps in knowledge about the clinical features, epidemiology, and virology of reported cases and the appropriate responses.

The U.S. government Sunday declared a national public health emergency after lab confirmation of 20 human cases of A/H1N1 swine flu - eight in New York, seven in California, two in Texas, two in Kansas, and one in Ohio.

At a news conference this morning, Mexican Health Secretary Jose Angel Cordova Villalobos said 149 people have died of the disease since the outbreak began in Mexico on April 13. The number of persons admitted to hospitals for severe pneumonia in the country is 1,995, of which 776 remain hospitalized, and 1,070 have been discharged.

Research is being carried out to confirm whether the biological agent involved produced severe pneumonia or swine fever in those who died.

Laboratory testing has found the swine flu A/H1N1 virus susceptible to the prescription antiviral drugs oseltamivir, also called Tamiflu, and zanamivir, also called Relenza, and the CDC has issued interim guidance for the use of these drugs to treat and prevent swine flu infection.