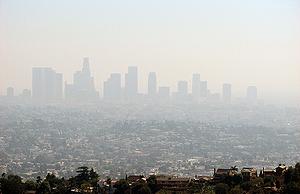 Six out of every 10 Americans - 186.1 million people - live in areas where air pollution endangers lives, according to the 10th annual American Lung Association State of the Air report released today.

Some of the biggest sources of air pollution - dirty power plants, dirty diesel engines and ocean-going vessels - also worsen global warming, the Lung Association says in State of the Air 2009.

State of the Air 2009 includes a national air quality report card that assigns A-F grades to communities across the country and details trends for 900 counties over the past decade.

The report finds that air pollution hovers at unhealthy levels in almost every major city, threatening people's ability to breathe and placing lives at risk.

The three cities most polluted by ozone are all in California - the Los Angeles-Long Beach-Riverside metropolitan area; Bakersfield, a center of agriculture, petroleum extraction and refining, and manufacturing in the San Joaquin Valley; and Visalia-Porterville, a San Joaquin Valley agricultural community.

The association, along with states, public health and environmental groups, has taken the EPA back to court in an attempt to force the agency to adopt the .060 ppm standard before its scheduled five-year review in 2013.
State of the Air 2009 grades counties for both 24-hour and year-round levels of particle pollution - a toxic mix of microscopic soot, diesel exhaust, chemicals, metals and aerosols.

One in six people in the United States lives in an area with unhealthy year-round levels of fine particle pollution (termed annual average levels).

New data show that women in their 50's may be particularly threatened by air pollution and that diesel truck drivers and dockworkers who are forced to breathe exhaust on the job may face a greater risk of developing lung cancer or chronic obstructive pulmonary disease.

"The science is rock-solid. We now know that air pollution can impair the lung function of even the healthiest people," said Norman Edelman, MD, American Lung Association chief medical officer. "Air pollution worsens asthma and is a direct cause of heart attacks, which makes people living with lung and heart disease especially vulnerable."

In addition, Dr. Edelman suggests, people who live with particle pollution "must take action help us and other organizations to change the EPA regulations. It's personal, it's affecting them and their neighbors." In addition, he said, they can take local political action to change regulations such as engine idling, and clean up diesel-powered school buses.

Low income people and some racial and ethnic groups often face greater risk from pollutants. Pollution sources like factories and power plants may be closer to their homes, the Lung Association points out. Many live near areas with heavy highway traffic or have poor access to health care, which makes them even more vulnerable. Some racial and ethnic groups have a higher prevalence of diseases like asthma or diabetes, which compounds the ill effects of air pollution for these groups.