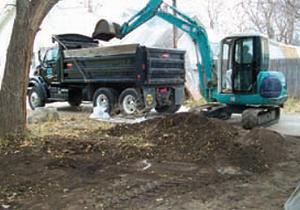 The nation's largest residential lead site reached a key milestone today with the signing of EPA's Final Record of Decision after more than 10 years of effort to address the toxic problem by the U.S. EPA, health agencies, community organizations, schools, medical groups, and the public.

Thousands of residential yards in eastern Omaha have been contaminated over a period of decades by airborne lead emissions from the former ASARCO lead refinery. By signing the Record of Decision, the EPA agrees to clean up nearly 1,000 of them in addition to the more than 4,600 properties the federal agency has already cleaned.

The selected final remedy with an estimated capital cost of $236.6 million "addresses the principal current and potential risks to human health and the environment," says the EPA in the Record of Decision. The remedy involves excavation, backfilling, and revegetation of lead-contaminated residential soils in the 9,966 residential properties where the lead levels exceed 400 parts per million.

The agency will stabilize exterior lead-based paint that threatens the long-term protectiveness achieved through excavation and replacement of lead contaminated surface soils.

"The pace and scope of this cleanup are unprecedented for the nation's Superfund program," Acting Region 7 Administrator William Rice said. "It reflects one of the agency's most important mission priorities, the protection of children's health."

Health research and other scientific studies have shown that young children ingest lead from environmental sources by touching the contaminated surface, such as paint or soil, and then putting their hands in their mouths. "Elevated lead levels in the blood of children ages six and under are considered particularly dangerous, and have been attributed to a host of physical and behavioral health problems, including aggressiveness, lower IQs, hearing deficiencies, kidney damage, and neurological disorders," Rice said.

Since 1999, EPA has cleaned up more than 4,600 properties and sampled more than 35,000 properties in Omaha. Under the final remedy outlined by the Record of Decision, an additional 10,000 properties will also be addressed. After the implementation of the final remedy outlined in the Record of Decision, EPA anticipates that hazardous substances, pollutants, or contaminants will not remain on-site at remediated properties above levels that allow for unlimited use and unrestricted exposure.

In the Decision document, the EPA warns that most children with lead poisoning do not look or act sick. The only way to know if your children have lead poisoning is to have them tested every year from one through six years old.

ASARCO LLC is a mining, smelting, and refining company based in Tucson, Arizona that mines and processes copper and other metals. The company, a subsidiary of Grupo Mexico, the largest mining corporation in Mexico and the third largest copper producer in the world, is currently in Chapter 11 bankruptcy. ASARCO has 20 Superfund sites across the United States, and the company is the subject of several pollution lawsuits.