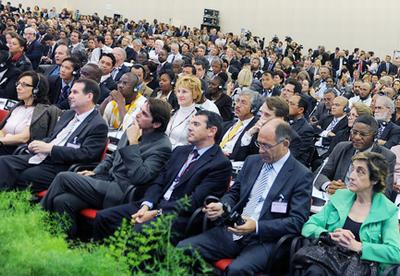 The last negotiating session before the crucial UN Climate Change Conference in Copenhagen ended today in Barcelona, with some progress made towards a legally-binding global deal to limit greenhouse gas emissions but with two key issues still unresolved.
Little progress was made on firm emission reduction targets for developed countries, nor was progress made on financing that would allow developing countries to limit their emissions growth and adapt to the climate change impacts that are already inevitable.
At a press conference in Barcelona, the UN's top climate official expressed confidence that when the chips are down at Copenhagen, governments will seal the deal.
But failure is also a possibility, de Boer admitted, if developed countries fail to commit to steep greenhouse gas emissions cuts in the medium term or if they fail to fund assistance for developing countries.

In Barcelona, despite frustration by African nations and others that stalled discussions, de Boer said progress was made on adaptation, technology cooperation, reducing emissions from deforestation in developing countries, and mechanisms to disburse funds for developing countries.

There is still a lack of information about the level of commitment developed countries will make to cut greenhouse gas emissions in the near term. Japan highlighted the recent increase of its target to a 25 percent reduction from 1990 levels by 2020 and said it would not be in a position to increase that level of ambition. The European Union said they could only increase their target from 20 to a 30 percent reduction from 1990 levels by 2020 if other countries take on similar targets.

From December 7-18, Denmark will host the UN climate conference, known as COP15 for the 15th Conference of Parties to the UN Framework Convention on Climate Change.

In the corridors of the Barcelona conference center some delegates "were contemplating the increasingly clear high-level messages that a legally-binding agreement at COP 15 will not be possible," the Earth Negotiations Bulletin reports, adding, "Some observers were visibly disappointed, while others tried to stay positive as they speculated about prospects for a legally-binding instrument sometime in 2010."

The global conservation group WWF expressed hope that an "ambitious" climate treaty can still be achieved in Copenhagen despite most policy makers' focus on what they cannot achieve rather than what they can do to prevent the worst consequences of runaway climate change.

Kim Carstensen, the leader of WWF's global climate initiative, said the Danish Presidency has been an active participant in playing down expectations for a legally binding and enforceable outcome. "This needs to stop," he said. "The Danish Presidency must create a level of ambition that corresponds with climate crisis and the will of the major part of the world. Trying to please the U.S. and other developed countries with vague language will not give us the climate deal the world needs."