This remains the number one threat for the tiger. However, in most cases, several driving forces act at the same time: loss of habitat, subsequent conflict with humans and trade of poached tigers. In the past, conflicts with humans would appear when habitat would become fragmented, forcing tigers to incursions into communities. This was typically the case for the Java tiger. Tigers would then be killed in retaliation of possible attacks or to prevent their occurrence. Nowadays, in a globalized economy, local communities all know the value of products derived from tiger body parts. If this trade might be opportunistic for some communities, organized crime to poach tigers also exists. This is clearly the case for Eastern Siberian tiger populations. Though deforestation happens, there is no immediate threat of complete habitat loss because of the low human density in the area. However, hunting to fuel the nearby Chinese market is an extremely worrying issue.

Habitat fragmentation due to deforestation:

This threat is particularly strong in the Indian subcontinent with relatively high human densities and a need for farming land.

In the last decades, large scale industrial crops have played a significant role in the vanishing of vast areas that were primary tiger habitats in Southeast Asia. This is particularly true in Malaysia and Indonesia, which have become the world top palm oil producers. Thailand and Cambodia, with increasing populations requiring more land for staple food such as rice have also lost large portions of habitat suitable for the tiger.

Habitat fragmentation inevitably coincides with tiger-human conflict. Tigers will generally hide in the remaining pockets of their initial biotope. However, preying of large mammals leads to excursions outside their usual range, with possible competition for food with humans in communities that hunt wild game. Though tiger attacks on humans remain extremely rare, their psychological impact on communities is such that it generally accelerates the extirpation of the remaining tigers.

There are today three times more tigers in captivity than in the wild. Their gene pool might be a key factor for the survival for the different tiger subspecies. However, tigers that are not part of conservation programs generally breed without the control of biologists. This means that hybridization between subspecies occurs. Specific features such as white fur are artificially selected in the captivity. This reduces even more the gene pool suitable for conservation programs.

Is there enough space for tigers on Earth?

Why tigers are so important:

In all places where they are present, or have been present, tigers are a unique part of the cultural heritage. They have always been an object of fascination and admiration due to their strength, agility, speed and perseverance.  If we want future generations to experience the joy and fascination of seeing those animals in the wild, then we have to act now!
Tigers are predators on the top of different types of ecosystem: rainforest (Sumatra, Indochina, Malaysia), savannah (India), mangrove (India, Bangladesh), tundra (Siberia, northern China).

On the contrary, roaming tigers with possible contacts with humans are a clear sign that habitat destruction has gone too far and that the original ecosystem is under anthropogenic threats. Humans often become tiger's direct competitors as they also target large mammals for meat

A focus on insular tigers:

There have been three subspecies of insular tigers identified in recorded history: the Bali tiger, the Java tiger and the Sumatra tiger, all living in the Indonesian archipelago.  However, only one still subsides until today, although it is critically endangered in Sumatra.

Bali tiger (Panthera tigris ssp. Balica)  is thought to have gone extinct in the late 1930's without much concern from the authorities. At that time, Bali was still part of the Dutch East Indies under Dutch administration. The tiger was hunted to extinction and its habitat loss made it even more susceptible to human pressure on such a small island.

It was the smallest of all 3 insular subspecies and there was a consensus that it was closely related to the Java tiger. However, whether both subspecies diverged by a rise in water level after the last ice age or by a colonisation from Java to Bali through the Bali Strait, the true cause is still unknown. Panthera tigris ssp. sondaica was originally distributed in all parts of the island of Java. The increased human population growth rate during the last century had a huge impact on the availability of habitats suitable to tigers.

Several combined effects are generally identified in such vanishing process:

Compared to the extinction of the Bali tiger, the dwindling population of Java tigers drew more attention. Although decided at a late stage, conservation measures were taken by the Indonesian government. This included the 1972 appointment of the Meru Betiri Forest of East Java into a tiger sanctuary. However, the population was already engaged in an irreversible extinction process. The last tiger was killed in 1984.

Expeditions after 1984 sponsored by environmental NGO's and scientific teams did not find any evidence of the tiger existence. After the Bali tiger, the Java tiger lost its battle. There was simply no room left for it.
It is said that some captive tigers in the world keep some part of the Java tiger genetic pool. However, the subspecies is extinct both in the wild and in captivity.

Lessons learned from the past: How to protect the last remaining insular tiger?

Panthera tigris ssp. sumatrae remains in fragmented habitats on the island of Sumatra. According to the International Union for Conservation of Nature (IUCN) Red List, there are an estimated 400 individuals scattered in up to 7 areas with possible smaller populations in 3 other areas. However, the smaller populations are not viable on the long term.

Sumatra is considered to be a powerhouse for Indonesian economic growth with an increased development of large scale crops such as palm oil. Sumatra, less densely populated than Java is also a magnet for internal migration. 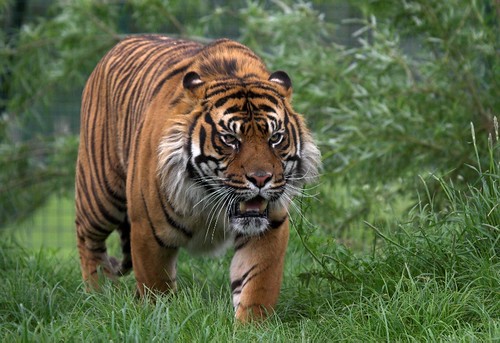 Similarly to what Java experienced in the 20th century, the population increase and cash crops such as palm oil are taking a toll on the tiger's remaining habitats.

The possibility of illegal tiger part trade for use in Chinese medicine adds yet another threat. In comparison, the Java tiger was spared of this threat because of the availability of tiger populations in China in the first part of the 20th century. In a globalized economy, illegal trade has become a new driving force to extinction even when there is only little local demand.

On a less dark side, several zoos worldwide have joined their efforts to preserve the Sumatra tiger in captivity.  This is a complicated task which requires maintaining a viable genetic pool for this big cat. However, with Indonesia's emerging economy on the way to a consumer society, it does not clearly show a strong will to preserve suitable tiger habitats in Sumatra on the long term. There are several natural reserves, the largest being Gunung Leuser National Park and Kerinci Seblat National Park. However, remaining wild tiger populations not within those reserves can be considered at a higher risk of harm.

In addition, local zoos are far from having the means to take part in a challenging conservation program (see links in the “More Information” section).  This is a real concern since without a strong local leadership, preserving the Sumatra tiger on the long term against the appeal of short term benefits is very unlikely.

This was the first large meeting of this kind dedicated to an animal species and it is no coincidence that it took place during the Chinese year of the Tiger.

Conservationists triggered the alarm that there might be no tigers in the wild in the next year of the Tiger (2022) if no concrete conservation actions would be taken.

A global tiger recovery program was agreed by all parties. It includes cross-boundary protected areas and tougher monitoring of poaching as well as improving public awareness about tiger conservation.

This summit can really be considered as a strong symbol of an increased awareness about the tiger fate. However, it is also a last chance to prove that nations can unite theirs strengths and take common measures to protect an endangered species. If nations cannot put aside their own short term interests to work together, then the future of the tiger is definitely gloomy.

Fascination and admiration for tigers have also been contributors to their doomed fate. Humans have tried to possess their qualities from tiger relics (magical rites or amulets), or from ingesting tiger body parts (traditional medicine)

To give tigers a chance, we should: