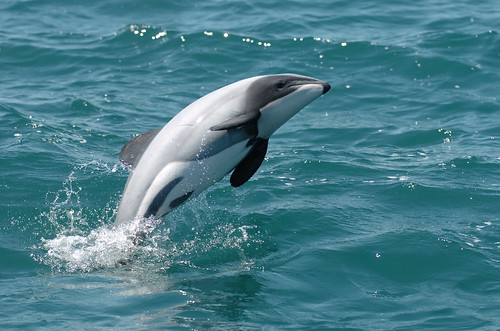 Ahead of the 2014 New Zealand general election set for September 20, the Green Party today launched its plan to protect the world’s smallest and most endangered dolphin, the Maui’s dolphin. Just 55 of these dolphins survive in the wild – all in New Zealand waters.

The plan is the third component of the party’s environmental priority this election – clean rivers and beaches.

The Green Party would protect Maui’s dolphins from being killed in the West Coast North Island Marine Mammal Sanctuary established to protect them in 2008 under the Labour Government of then Prime Minister Helen Clark.

The move came less than a week after the International Whaling Commission urged the government to do more to save the critically endangered species.

“This is another yet example of National sacrificing the last remaining 55 Maui’s dolphins in order to give the mining industry a leg-up, and showing a total disregard for the things New Zealanders care about,” said Green Party oceans spokesperson Gareth Hughes.

But Conservation Minister Nick Smith said today, “The Green Party’s dolphin plan to prohibit any new oil and gas developments off the North Island’s West Coast and to ban fishing in areas where there is no record of the Maui’s dolphin does not make sense.”

“There has not been a single incident involving Maui’s dolphin and Taranaki’s $3 billion oil and gas industry in over 40 years. The prohibition on any new oil and gas exploration in this large area will come at a huge economic cost long-term not just to Taranaki but more widely to New Zealand. The Government introduced compulsory regulations for protecting marine mammals from exploration activities in 2010 that ensures no harm to Maui’s,” Smith said.

For support of the Green Party policy, Turei quoted Canadian biologist Dr. Lindy Weilgart of Dalhousie University, who has served on numerous expert panels and committees. “Seismic surveys can cause dolphins to avoid important habitat, can interfere with their food-finding, reproduction, resting, and hearing sounds vital to their survival, and can cause stress effects.”

In recognition of the hardship that fishers will face as a result of the new fishing rules, the Green Party would spend up to NZ$20 million over three years to help them transition to alternative dolphin-friendly fishing gear, technology-led research and appropriate permitting.