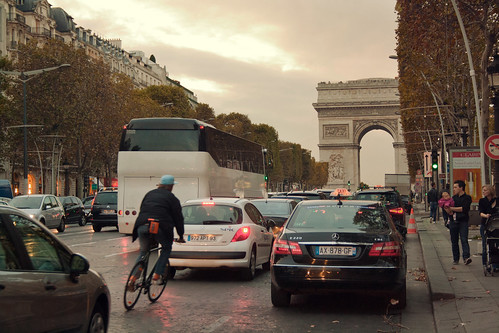 More than 125 million Europeans could be exposed to levels of road traffic noise above legal guidelines, causing up to 10,000 premature deaths each year, finds a new assessment published today by the European Environment Agency (EEA).

“Noise in Europe 2014,” the EEA’s first noise assessment report, analyzes exposure to noise levels and the environmental and public health problems that result.

The effects of noise are particularly widespread. For the one in four Europeans exposed to noise levels above the EU’s threshold for assessment and action, 55 decibels, there are both direct and indirect health effects, the report states.

“Noise exposure can increase blood pressure and vasoconstriction. After prolonged exposure, susceptible individuals may develop more permanent effects such as hypertension and heart disease,” the report states, basing this conclusion on laboratory studies in humans and animals.

Environmental noise is linked to 43,000 hospital admissions, 900,000 cases of hypertension and up to 10,000 premature deaths per year, the EEA estimates.

Road traffic is the main source of noise in Europe, the report says, followed by railways, airports and industry.

Noise pollution is a growing environmental concern. It is caused by a varied number of sources and is widely present not only in the busiest urban environments, it is also pervading once natural environments.

The adverse effects can be found in the well-being of exposed human populations, in the health and distribution of wildlife on the land and in the sea, in the abilities of our children to learn properly at school and in the high economic price society must pay because of noise pollution.

This report aims to quantify the scale of the problem, assess what actions are being taken and to consider future actions that might solve the problem.

Larger cities are noisier. Cities housing more than 250,000 people generally have a larger share of the population exposed to levels above the legal guidelines.

Noise considerations should be incorporated into planning and building new infrastructure according to the report. Moreover, quiet areas should be protected.

Wildlife may also be seriously affected by noise, according to a mounting body of evidence.

They report that “political ambitions are high” with the European Union’s Seventh Environment Action Programme containing the objective that noise pollution in the EU will significantly decrease by 2020, moving closer to World Health Organization recommended levels.

But the authors say that a complete assessment and future outlook are hindered by the fact that exposure estimates reported by countries are not complete, with as little as 44 percent of the expected amount of data delivered in the latest reporting round.

The lack of comparable and common assessment methods often causes significant inconsistencies in exposure estimates, between different countries and within a single country, the report states.

In June 2002 the European Parliament and Council adopted the Environmental Noise Directive, also known as the “END.”

It aims at providing a basis for developing EU measures to reduce noise emitted by major sources such as road and rail vehicles, but does not set binding limit values, or prescribe the measures to be included in Member States’ action plans.

It does require Member States to monitor the environmental problem and draw up “strategic noise maps” for major roads, railways, airports and agglomerations. These maps are used to assess the number of people annoyed and sleep-disturbed respectively throughout Europe

Member States must inform and consult the public about noise exposure, its effects, and the measures considered to address noise, in line with the principles of the Aarhus Convention.

Authorities must draw up action plans to reduce noise where necessary and maintain environmental noise quality where it is good.