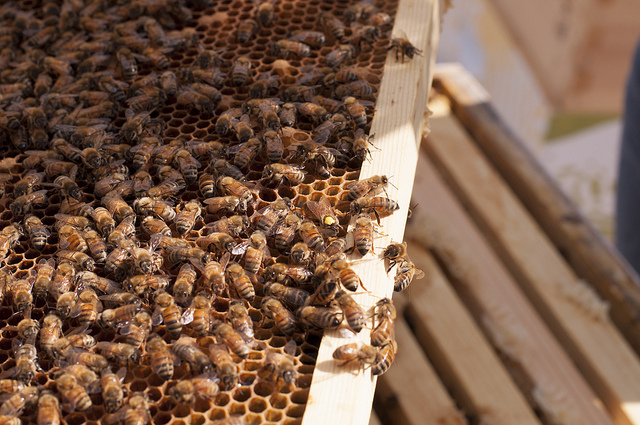 The first study to investigate the effects of neonicotinoid insecticides on honey bee queens finds that these chemicals may contribute to bee colony mortality by affecting queen health. It strengthens calls for more thorough environmental risk assessments of these widely used pesticides to protect bees.

A research team from the Institute of Bee Health at the University of Bern, from Agroscope at the Swiss Confederation, and from the Department of Biology at Canada’s Acadia University, demonstrated in an article in the open-access journal “Scientific Reports” from the Nature Publishing Group that honey bee queens are “extremely vulnerable” to the neonicotinoids thiamethoxam and clothianidin.

Previous research suggests that exposure to these chemicals causese both lethal and sub-lethal effects on honey bee workers, but nothing has been known about how they may affect queens.

The observation that honey bee queens are highly vulnerable to these common neonicotinoid pesticides is “worrisome, but not surprising,” says senior author Laurent Gauthier from the Swiss Confederation’s Agroscope.

“Beekeepers frequently cite poor queen health as a major cause of colony death each year,” he said.

Honey bees are complex social organisms that demonstrate female reproductive division of labor between the queen and workers within a colony.

Since there is only a single queen in each colony, queen health is crucial to colony survival.

Soon after birth, each queen will embark on a series of mating flights to collect sperm from males called drones. Afterwards, she will return to her colony to lay eggs and be cared for by workers.

Co-author Peter Neumann from Bern said, “This study, along with other recently published ones, supports calls for more thorough environmental risk assessments of agricultural chemicals to protect biodiversity and ecosystem functioning.”

Honey bees, like all insect pollinators, provide crucial ecosystem and economic services. Annually in Europe and North America, millions of honey bee colonies produce honey and contribute to the pollination of a range of agricultural crops, from carrots to almonds to oilseed rape, that is valued at billions of Euros.

In 2013 governments in Europe took a precautionary approach by partially restricting the application of the neonicotinoid pesticides thiamethoxam, clothianidin, and imidacloprid, with the mandate to perform further environmental risk assessments.

A new inter-governmental review will take place in the coming months.

In late August thousands of people, some dressed as bees, swarmed in Parliament Square to protest the July decision of the UK Parliament to temporarily allow farmers to spray the toxic neonicotinoids on their crops.

Over 500,000 people signed a petition opposing suspension of the ban.

The UK Department for Environment, Food and Rural Affairs, Defra, says it followed the advice of the UK Expert Committee on Pesticides and the agency’s chief scientist, to grant a limited emergency authorization of two pesticides in areas where oil rape crops are at risk of pest damage.

Defra’s approach contrasts with other EU countries such as Denmark, which have issued unrestricted emergency authorizations for the same use of neonicotinoids.