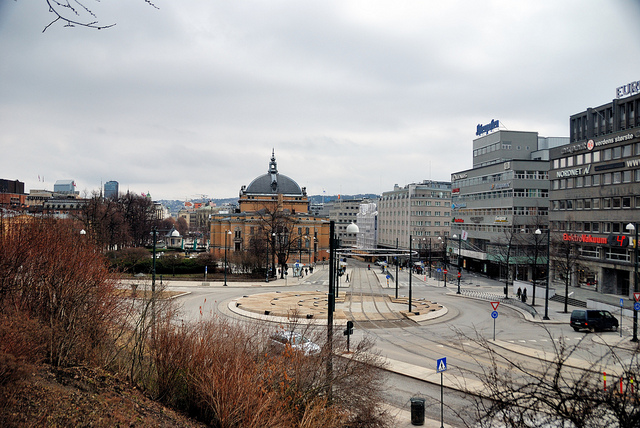 Oslo’s newly-elected city council today presented its plan to ban cars in the downtown city center by 2020 in an effort to reduce pollution and curb climate change.

The new council is composed of members of the Labour Party, the Green Party and the Socialist Left Party. After 19 years of a more right-leaning city government, there was a shift to the greener left in the September 14 election.

“We want the city center free of cars,” said Berg. “We want the town center be a better area for pedestrians, cyclists.”

Berg said a car-free city center would be “a better area for shops and everyone.” She said the plan will benefit all Oslo citizens, despite fears expressed by shopkeepers that the ban would negatively affect their businesses.

Oslo has around 650,000 inhabitants and some 350,000 cars, Most car owners live outside the city center in the greater Oslo urban area, population nearly one million.

The new city council says it is taking steps to reduce greenhouse gas emissions in Oslo by half by the year 2020 and by 95 percent in the year 2030.

The new council said today that it will prioritize a new subway tunnel through the inner city. Oslo already has a large number of parks and green areas in the city core.

In addition to making Oslo car free inside ring 1, Berg says the Oslo city government will create a fund to subsidize the purchase of electric bicycles for Oslo inhabitants.

As soon as the law permits, low emission zones in the city will be established. Sixty kilometers (40 miles) of new bicycle lanes and many pedestrian walkways are planned.

“In 2030, there will still be people who drive a car in Oslo, but they will be emission-free,” said Berg. “I think that in a few years unnecessary car use will seem as odd as it currently does to smoke inside.”

The biggest fight is sure to come over the new council’s pledge to halt the planned expansion of the often-clogged E18 highway west of Oslo.

“There is now full confusion about what this new city government in Oslo really means about the E18,” Linda Hofstad Helleland of the Conservatives, an MP who leads the Parliament’s transport committee, told Norwegian Broadcasting, NRK. “We won’t accept any further delays in the E18 expansion plan.”

European route E18 runs about 1,890 kilometers (1,174 miles) from Craigavon in Northern Ireland in the UK to Saint Petersburg, Russia, passing through Scotland, Norway, Sweden, and Finland.