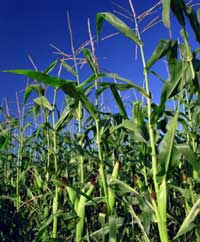 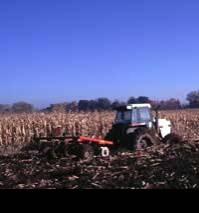 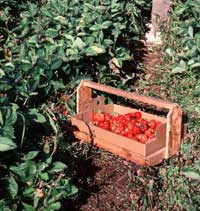 Children of the Corn

News about genetically engineered crops breaks so fast that it's hard to keep up. For those who look upon biotech foods with suspicion, much of the latest news is surprisingly good. The companies who splice strange genes into our corn and potatoes and soybeans are pushing their products so recklessly that they are alarming not only environmentalists and consumers, but also farmers, supermarket chains, baby-food makers, and investors. They are going to have to slow down.

But one bit of news is disturbing. Since the Europeans and Japanese are refusing to eat gene-modified (GM) foods, these crops are now being dumped almost exclusively on the American market. We can't avoid them. They are unlabeled. They are in everything from potato chips to salad dressings. If GM foods cause problems, we will be the first to find out -- unless we refuse to be guinea pigs.

First a quick review of the news.

You've probably heard about the butterflies. One kind of genetically engineered corn now makes its own insecticide, using a gene pasted in from a bacterium, in order to kill corn ear-worms. It turns out that this corn may also kill butterflies. Pollen from the biotech corn was scattered onto milkweed leaves (simulating the corn pollen that blows all over the Midwest every summer). When monarch caterpillars ate those leaves, they died.

That happened in a lab, not in nature. No one knows yet whether it happens in nature or happens to other kinds of butterflies or happens to other innocent creatures that run into pesticide-producing corn. The point is not that biotech kills butterflies, though it might. The point, made by ecologists for years now, is that gene-spliced inventions are being spread over millions of acres at a hectic pace without any idea what their effects might be. Unwelcome surprises are almost inevitable.

Europeans, having recently heard from their governments that mad cow disease is no health threat whatsoever, are not in a trustful mood. They insist that GM foods at least be labeled so consumers have the option of avoiding them. Suppliers -- such as our own Archer Daniels Midland, "supermarket to the world" -- said it would be impossible to separate out GM soybean or corn. So European consumers stopped buying any soybeans and corn, especially if imported from the United States.

That snapped European supermarkets to attention. Within weeks they informed ADM and other processors that they would accept no products containing GM corn syrup, corn starch, corn meal, soy oil, soy protein, etc. ADM found it possible after all to maintain separate supply lines. The regular foods now go to Europe. The GM stuff goes to us.

Meanwhile Greenpeace activists began to question Gerber about the GM content of its baby food. Gerber, though it is owned by Novartis, one of the big gene-splicing companies, didn't waste time. It announced not only that it would drop suppliers that couldn't guarantee un-spliced foods, but more than that, it would use only organic ingredients. Heinz joined in. Another baby food maker, Healthy Times Natural Food, switched away from canola oil, canola being another crop that is commonly gene-modified and not separated or labeled.

Now analysts from Wall Street to Deutsche Bank are declaring genetic engineering a risky investment. Farmers who planted expensive GM seed last spring are watching the prices of their crops go down. A just-issued report of the British Economic and Social Research Council chastises its government for mindlessly promoting GM foods and says, "If anything the public are ahead of many scientists and policy advisors in their instinctive feeling for a need to act in a precautionary way."

So, with no warning or labeling, much less fanfare, GM foods are being channeled to Americans. (Except babies.) Common wisdom in the business is that Americans don't care whether their food is genetically manipulated.

I suspect the next surprise will be the disproof of that common wisdom. The anti-GM activists, fresh from victories in Europe, know how to strike nerves. They've already cleansed the baby food. Next, if they're smart, they'll organize school kids to boycott McDonald's and Frito-Lay until the pesticide-producing genes are removed from the fries and chips.

Meanwhile, if you want to be a creative irritant, just ask every time you buy a product or order a meal containing potatoes, corn, canola, or soy, "Is there anything genetically modified in here?" If you want to play it absolutely safe, buy certified organic.

Only consumer caution or consumer outrage will slow down the gene splicers to the point where we can all have a careful, rational, democratic discussion about who puts what in our foods, for what purposes, with what tests and proofs of safety (safety for butterflies and other bystanders as well as people), with what labels, and with what regulations about people being treated, without their knowledge much less their consent, as test animals.

Donella H. Meadows is director of the Sustainability Institute and an adjunct professor of environmental studies at Dartmouth College.