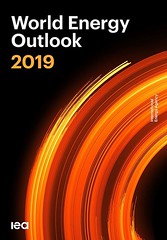 The world's CO2 emissions are set to continue rising for decades unless there is greater ambition on climate change, despite the "profound shifts" already underway in the global energy system.

That is one of the key messages from the International Energy Agency's (IEA) World Energy Outlook 2019, published today. This year's 810-page edition is notable for its renamed central "Stated Policies Scenario" (STEPS), formerly known as the "New Policies Scenario".

In this scenario, which aims to mirror the outcome of policies already set out by governments, a surge in wind and solar power would see renewable sources of energy meeting the majority of increases in global energy demand. But a plateau for coal, along with rising demand for oil and gas, would mean global emissions continue to rise throughout the outlook period to 2040.

In contrast, the report's "Sustainable Development Scenario" (SDS) sets out what would be required to give a 50% chance of limiting warming to 1.65C, which the IEA describes as "fully in line with the Paris Agreement".

It says the SDS would require a "significant reallocation" of investment away from fossil fuels towards efficiency and renewables, as well as the retirement of around half the world's fleet of coal-fired power stations and other changes across the global economy.

The IEA has this year also explored, but not modelled in detail, what it would take to limit warming to no more than 1.5C above pre-industrial temperatures, the aspirational goal of the Paris Agreement.

The World Energy Outlook (WEO) is one of the most heavily scrutinised documents in the annual calendar of publications on the topic. Its hundreds of pages of analysis are based on thousands of datapoints, drawn from governments around the world, as well as the IEA's World Energy Model.

The IEA says that it does not make forecasts in its outlook. Instead, it presents the consequences of societal energy "choices" in terms of CO2 emissions and other outcomes. The report explains:

"The World Energy Outlook does not aim to provide a view on where the energy world will be in 2030 or 2040. This will depend on hugely important choices that lie ahead. What the WEO-2019 does aim to do is to inform decision-makers as they design new policies or consider new investments or shape our energy future in other ways. It does so by exploring various possible futures, the ways that they come about, the consequences of different choices and some of the key uncertainties."

The outlook spans three alternative "futures", set out in the introduction and described in a blog, published ahead of the report's release, on "understanding the WEO scenarios".

The outlook's central scenario is STEPS, which has "the intention to ‘hold up a mirror' to the plans and ambitions announced by policymakers without trying to anticipate how these plans might change in future". This includes the Paris climate pledges made by governments. The IEA does not assume that all policy goals will be met, however:

"[A]mbitions are not automatically incorporated into the scenario: full implementation cannot be taken for granted, so the prospects and timing for their realisation are based upon our assessment of the relevant regulatory, market, infrastructure and financial constraints."

Stated policies include some net-zero emissions goals, such as the UK's. Similar goals agreed or under discussion, including in the EU, cover 12% of global emissions, the IEA says. This makes the targets significant, but not decisive, in terms of tackling the global emissions. But the IEA says there could be larger knock-on effects due to the technologies and approaches developed to meet net-zero targets, which could help others to also cut emissions.

The second WEO future is the "Sustainable Development Scenario" or SDS. This is a different type of scenario that starts from sustainable development goals on energy access, air pollution and CO2 emissions before working backwards to show what would be needed to reach them.

Finally, the "Current Policies Scenario" (CPS) would see governments renege on their stated goals and intentions, with the energy system guided only by policies and laws that are already in place.

This year's outlook continues to feature the CPS in its text, charts and data. But it is afforded lower priority, with the phrase "current policies scenario" used 102 times over 810 pages – far less often than the 793 mentions of the STEPS or the 535 for the SDS. The outlook says the CPS highlights the consequences of inaction and the level of effort required to meet even the STEPS pathway.

On the basis of stated plans and policies around the world, the IEA says that global energy needs will continue to rise by 1% per year until 2040, adding demand equivalent to China's current total.

This growth is driven by a rising population – based on the UN's "medium" projections to reach 9 billion people by 2040 – and an expanding economy, with global GDP increasing by 3.4% a year, per International Monetary Fund projections.

The rate of energy demand growth is around half the average rate of 2% seen since 2000, the IEA says, due to shifts towards less energy-intensive industries, energy efficiency gains and "saturation effects" – for example, where demand for cars reaches a peak.

Some 49% of demand growth would be met by renewables in the STEPS, as shown with the red line in the chart, below. Gas use is also expected to rise rapidly (blue), overtaking coal to become the second-largest source of energy after oil and meeting a third of the rise in overall demand.

Global primary energy demand by fuel, millions of tonnes of oil equivalent, between 1990 and 2040. Future demand is based on the STEPS. Other renewables includes solar, wind, geothermal and marine. Source: IEA World Energy Outlook 2019. Chart by Carbon Brief using Highcharts.

In contrast to the rapid gains for gas and renewables, the IEA STEPS sees coal use plateau and then decline slightly from today's levels (black line above). This confirms last year's analysis that global coal demand peaked in 2014.

The IEA now also suggests that oil demand will start to level off by the 2030s (orange line) as a result of vehicle fuel-efficiency gains and the rise of electric vehicles (EVs), which see passenger car oil demand peak in the "late 2020s". There are "profound questions" over the future of conventional cars, it says, given falling costs for EVs.

Oil demand for freight, shipping, aviation and chemicals "continues to grow", the IEA says, with the growing popularity of SUVs another potential factor propping up demand. (Notably, documentation for the Saudi Aramco share sale also has global oil demand levelling off from around 2035.)

The global rise of SUVs is challenging efforts to reduce emissions.

If the appetite for heavier & bigger cars continues to grow at a similar pace to the past decade, this would add nearly 2m barrels a day in global oil demand by 2040.

Some two-thirds of the increase in global energy demand to 2040 comes from the Asia Pacific region, under the IEA STEPS. India becomes the world's most populous country and its energy demand doubles, making it the single largest contributor to global growth and accounting for more than a quarter of the total increase.

Within this total, the STEPS sees rising coal demand from Asian countries offset large declines in the US and Europe. The IEA says:

"Coal is the incumbent in most developing Asian countries: new investment decisions in coal-using infrastructure have slowed sharply, but the large stock of existing coal-using power plants and factories…provides coal with considerable staying power in the STEPS."

The rise of renewables anticipated under the STEPS to 2040 is demonstrative of the "profound shifts" described by the IEA, yet it also points to the "slow moving" nature of the global energy system, as exemplified by the long, high plateau in demand for coal.

These shifting shares of demand growth are shown in the chart, below, with coal, oil and gas (shades of blue) having met most of the historical increases in energy use (leftmost columns).

While the STEPS maps a future where renewables meet half of the increase in demand to 2040, and the pace of growth slows due to shifting economic factors and energy efficiency (central columns), it remains well short of putting a cap on global CO2 emissions (see discussion below).

If increases in global temperatures are to be stopped, then even more decisive changes will be required, as shown in the example of the IEA SDS (rightmost columns).

The rising portion of demand growth met by renewables sees the fossil fuel share of global energy use decline from 81% in 2018 to 74% in 2040 under the STEPS, or 58% under the SDS.

Moving from the STEPS to the SDS will require a wide range of changes, most of which have long been on the agenda for policymakers. As the report explains:

"The global value of fossil fuel consumption subsidies in 2018 was almost double the combined value of subsidies to renewable energy and electric vehicles and the revenue from carbon pricing schemes around the world. This imbalance greatly complicates the task of achieving an early peak in emissions."

By the 2030s, investment in fossil fuels without carbon capture would halve in the SDS, relative to the average during 2014-2018. At the same time, investment in renewables, electricity networks and nuclear would roughly double and spending on energy efficiency would nearly quadruple.

This reflects the fact that energy efficiency is the single most important factor in tackling emissions, the IEA says, meaning that overall demand in 2040 under the SDS is slightly below today's levels.

It says "the potential for efficiency improvements to help the world meet its sustainable energy goals is massive" and it has convened a Global Commission for Urgent Action on Energy Efficiency to boost progress.

In part, this is a response to data showing that efficiency improvements are drying up and 2018 saw the slowest rate since 2010, with this "faltering momentum" a cause for "deep concern". It cites "a relative lack of new energy efficiency policies and of efforts to tighten existing measures".

The @IEA World Energy Outlook is out today and shows once again the critical role of energy efficiency for achieving carbon goals. https://t.co/c48Vw4Az5d pic.twitter.com/CZrzErEToP

Lower demand has knock-on consequences, particularly when combined with more rapid growth from renewables. Notably, demand for coal, oil and gas progressively declines under the SDS, with coal facing particularly large reductions (grey chunks in the rightmost columns, above).

Within this total, the IEA suggests that coal use in the power sector would be hardest hit. It says that more than half of current coal-fired power stations would retire by 2040 in the SDS, representing a fleet larger than China's current capacity.

With half of retirements coming before the end of their useful lives, some of the $1tn of capital invested in the world's existing coal fleet would be put at risk, if warming is kept below 2C. Some 98% of the 222 gigawatts (GW) of coal in Europe and 88% of the 276GW in the US would close.

Under the SDS, the remaining coal plants would mostly need to be "repurposed or retrofitted", the IEA says. This means they would either operate limited hours, during peaks in demand and troughs in renewable output, or would face substantial investments to fit carbon capture and storage (CCS) technology to prevent their CO2 emissions.

This year's outlook contains new analysis on the methane released during coal mining, which it suggests has a greater warming impact than aviation and shipping combined.