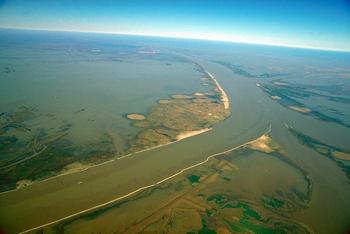 Scientists at the University of California-Santa Barbara who performed the first integrated analysis of all coastal areas of the world conclude the nutrient runoff from upstream farms that flows down the Mississippi River to the Gulf of Mexico is responsible for the most tainted coastal ecosystem in the world.

These nutrients have led to a persistent dead zone in the Gulf of Mexico caused by an overgrowth of algae that feeds on the nutrients and takes up most of the oxygen in the water, depriving other marine organisms of the oxygen they need to survive.

"One of the great challenges is to decide where and how much to allocate limited resources to tackling these problems," said Benjamin Halpern, the study's lead author, who is based at the National Center for Ecological Analysis and Synthesis at UC Santa Barbara.

"Our results identify where it is absolutely imperative that land-based threats are addressed - so-called hotspots of land-based impact - and where these land-based sources of impact are minimal or can be ignored," he said.

The hottest hotspot is at the mouth of the Mississippi River, the study shows, with the other nine most polluted coastal marine ecosystems in Asia and Europe.

The second most threatened marine coastal ecosystem is where the Ganges River drains into the Sunderbans delta in the Bay of Bengal near Dhaka, Bangladesh.

The third most imperiled coastal ecosystem is where the Mekong River empties into the South China Sea near Saigon, Vietnam.

Next are China's Pearl River where it meets the South China Sea near Hong Kong, Italy's Po River where it drains into the Adriatice Sea near Venice, followed by the Rhine and Meuse rivers that empty into the North Sea near Rotterdam in the Netherlands.

The authors state in their paper that both global-level and federal-level conservation and management prioritization efforts can benefit from identifying which countries are most in need of addressing land-based sources of impact to marine ecosystems.