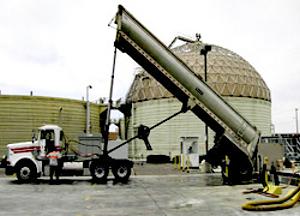 On June 23, San Francisco Mayor Gavin Newsom signed the nation's first mandatory composting law. "It's the most comprehensive recycling and composting legislation in the country and the first to require residents and businesses to compost food scraps," Newsom said.

Now, residents and businesses must begin increasing their composting efforts and finding new ways to keep food scraps out of the landfill.

EBMUD's anaerobic digester, in operation since 2004, is leading the way, and currently processes 90 tons per week of post-consumer food waste from restaurants and food processing facilities.

Anaerobic digestion, which means without oxygen, works by using bacteria inside the digester to decompose the food. It converts organic carbon in the food into biogas, which contains both carbon dioxide and methane.

The process begins when food waste is separated for disposal and pick up. At the EBMUD's main wastewater treatment plant, the food waste is broken down in large containers - the anaerobic digesters.

As the food decomposes, the digester captures the methane to power the wastewater treatment plant. Material remaining after the digestion process can be composted and used as a natural fertilizer to help grow food.

Food waste is the second largest category of municipal solid waste in the United States, accounting for 18 percent of the waste stream.

If half of the food waste produced in the United States was anaerobically digested, the U.S. EPA says, enough electricity would be generated to power about 2.5 million homes for a year.

Landfills are the second largest source of human-caused methane in the United States, and food waste contributes significantly to landfill methane production, the EPA says.

In California, there are 137 wastewater treatment plants that have anaerobic digesters for sludge, with an estimated excess capacity of 15-30 percent. This excess capacity could provide a potent recycling opportunity for post-consumer food waste in California, EPA officials suggest.