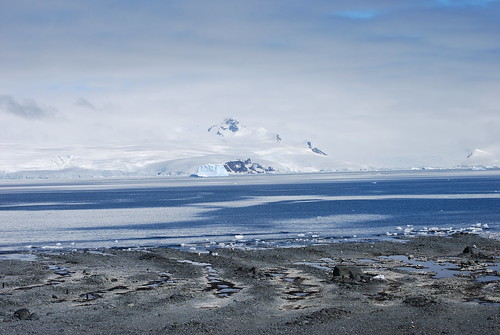 Polluting chemicals found in personal care products such as cosmetics, soaps and sunscreens has been discovered in waters off Antarctica at the same levels as many urban areas, according to new research from New Zealand.

A University of Canterbury research project has found the chemicals are present in sewage effluents discharged from Antarctic research bases.

Conducted by a Canterbury PhD student Phil Emnet under the supervision of Dr. Sally Gaw, in the university’s chemistry department, and by Professor Bryan Storey from Gateway Antarctica and Dr. Grant Northcott from Northcott Research Consultants, the study is published in the current issue of the “Journal of Environmental Research.”

“Emerging organic contaminants are contaminants that are not routinely monitored for in the environment and have the potential to have adverse ecological or human health effects,” said Dr. Gaw.

Active ingredients in personal care products are a class of emerging organic contaminants, or EOCs, increasingly being studied.

“These emerging contaminants were also found in Antarctic coastal waters at concentrations comparable to more urban areas elsewhere in the world, Emnet said.

“What was interesting was how widespread some of the EOCs were in the Antarctic coastal waters,” he said.

In addition to these permanent stations, approximately 30 field camps are established each summer to support specific research projects.

Emnet suggests that the environmental conditions, including extreme cold, could have contributed to the persistence of some of the chemicals from their personal care products in seawater.

“Sewage discharges may therefore be having greater impacts over a much wider area in marine environments than previously thought,” he said.

The presence of these contaminants in surface waters is of international concern as many of these everyday chemicals are designed to be biologically active and may have adverse effects on marine organisms.

The vulnerability of Antarctic organisms to these contaminants has not been studied, Gaw said. “This study will lead to better waste management and monitoring systems being put in place for Antarctic research programs.”

The study was funded by Antarctica New Zealand, an institute set up by the New Zealand Government in 1996 to manage its interests in Antarctica and the Ross Sea. As well as providing logistics support to the New Zealand scientific program, it runs research bases such as Scott Base.