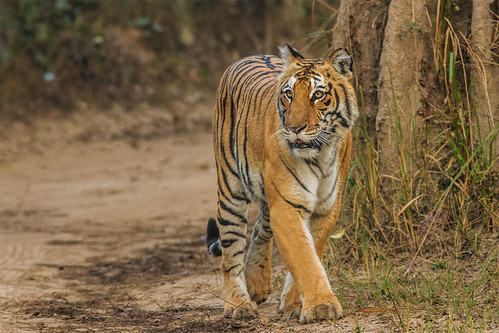 India’s wild tiger population has risen to 2,226 animals, an increase of 30.5 percent since the last estimate four years ago, according to a new report published today by the government of India.

The report, “Status of Tigers in India, 2014,” issued by the National Tiger Conservation Authority, is welcome good news about tiger recovery after decades of poaching and habitat destruction. It shows that the future of tigers in India depends on maintaining undisturbed core habitats for breeding tiger populations, habitat connectivity and protection from poaching of tigers and their prey.

In 2006 the government estimated there were just 1,411 wild tigers in India, a little less than half of all the world’s tigers remaining in the wild. By the 2010 estimate, India’s tiger population had increased to 1,706 animals.

Prakash Javadekar, minister for environment, forests and climate change said that government initiatives to streamline tiger conservation along with effective forest management and community participation had led to the increasing tiger population.

He attributes the rising tiger population to the success of various government measures – the Special Tiger Protection Force, Special Programme for Orphan Tiger cubs, efforts to control poaching and initiatives to minimize human-animal conflict and encroachment.

India is willing to donate tiger cubs to the international community and play a key role in global tiger conservation efforts, the minister said.

The new tiger population estimate is based on a survey of 378,118 square kilometers of forest area in 18 Indian states known to be inhabited by tigers. Investigators captured a total of 1,540 unique tiger photos.

The survey shows that tiger populations have increased in the states of Karnataka, Uttarakhand, Madhya Pradesh, Tamil Nadu, and Kerala.

The accompanying assessment of the change in forest cover in the tiger landscape of the Shivalik-Gangetic Plain indicates an improvement of forest cover in core areas of tiger reserves.

“To undertake a census at this scale reflects the dedication, experience and leadership of the Indian National Tiger Conservation Authority,” said Mike Baltzer, leader of WWF’s Tigers Alive Initiative. “However this investment and hard work can so easily be undone by poachers and it is imperative all tiger governments step up efforts to achieve zero poaching.”

Since 2010, all tiger range countries have been working to double global tiger numbers from an estimated 3,200 animals, a goal known as Tx2.

An essential part of Tx2 is for countries to count their tigers. India’s 2014 tiger estimation is the largest and most thorough tiger census ever undertaken.

This encouraging tiger population estimate from India, coupled with the increase from the last census, demonstrates that even in densely populated and economically booming Asia, ambitious targets for species recovery can be achieved, said WWF in a statement today.

WWF was a driving force behind the Tiger Summit in 2010 and remains a major force behind TX2 by driving political momentum to ensure tigers remain a top priority for world leaders, professionalizing wildlife protection by training rangers, as well as developing conservation standards and technology to achieve zero poaching.