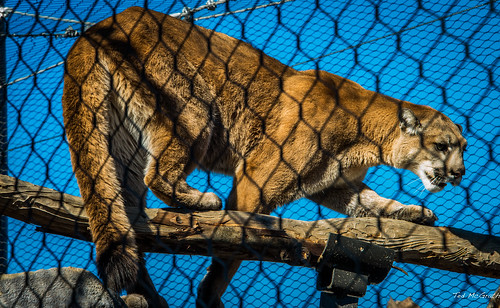 The Australian Government is taking action to protect African lions from what Environment Minister Greg Hunt called “the barbaric practice of canned hunting” by banning the import and export of trophies made from lions.

The announcement was made at the Global March for Lions in Melbourne earlier this month. The African lion, Panthera leo, is classed as Vulnerable to extinction by the authoritative IUCN Red List of Threatened Species.

The tighter wildlife trade measures now in place under Australian environment law are intended to act as a strong deterrent to discourage people from engaging in canned hunting.

“Canned hunting is the practice where lions are raised in captivity for one reason only – so that those who are prepared to pay top dollar are guaranteed a kill,” said Minister Hunt.

“Canned hunts offer an easy and sure kill because the odds are stacked in favour of the hunter. The lions will always be killed because they simply can’t escape,” the minister said.

“It is cruel. It is barbaric. And this is something that I, along with many other Australians, feel very strongly about. We want this horrific practice to be a thing of the past,” said Hunt.

“These new rules mean that if you go overseas and engage in the appalling act of canned hunting, you can forget about bringing your lion trophies back to Australia. You don’t deserve the right to celebrate the slaughter of these amazing creatures.”

Federal Member of Parliament for La Trobe, Wood, welcomed the introduction of the ban and said many Australians support efforts to stop the practice of canned hunting.

“These canned hunts use lions raised to be killed in compounds where they can’t run and they can’t hide. There are cases where the lions are drugged before a hunt. Sometimes baits are used to lure the lions for the kill,” said Wood.

“It can hardly be considered hunting, let alone be called a sport,” he said.

The ban not only applies to lion bodies, it also applies to imports of other African lion parts, as well as exports.

The maximum penalty for wildlife trade offenses is 10 years imprisonment and a fine of up to A$170,000 for individuals and up to A$850,000 for corporations.

Julie Sanders is country manager of the animal welfare organization Four Paws UK, which runs a lion sanctuary in South Africa for animals rescued from breeding or hunting farms, zoos and circuses.

“We hope the next UK Government will take this issue seriously and impose a ban on imports,” said Sanders. “As captive bred lions have no legal protection in South Africa, a similar decision from the UK would bring hope to animals in the unethical South African lion industry and to the last remaining majestic big cats living in the wild.”

“Between 2010 and 2013, 91 lions and lion body parts were imported to Australia,” Sanders said. “This contrasts with an average of 400 per year to the United States and 200 per year to EU Member States between 2007 and 2012, which explains why it is so important for these countries to follow Australia’s example.”

In February, a loophole in European law that allowed body parts from endangered animals to be imported into the European Union as hunting trophies was closed. The new measure requires import permits issued by EU Member States for the import of hunting trophies of six species, including African lions.

The population of African lions has dropped roughly 30 percent over the past two decades caused by indiscriminate killing in defense of life and livestock, coupled with prey base depletion,” the IUCN says.

Lion population estimates are difficult researchers agree. The IUCN’s best and latest estimate is the survival of 32,000 lions in 67 lion areas comprising 3.4 million km2 of habitat across Africa.