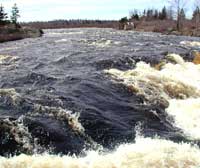 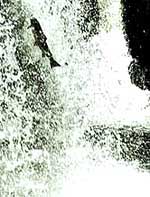 To catch an Atlantic salmon in the Machias River back in the 1940s -- and we're talking a legitimate salmon here, maybe 30 or 40 pounds -- didn't require a knack with rod and reel, nor even the wily patience of the angler. Mostly what you needed was decent aim with a rifle or pitchfork or jig hook.

Or for that matter, a good-sized river stone. "I remember school kids hitting them with rocks," says Nate Pennell, who grew up near the river in the village of Whitneyville in eastern coastal Maine. "When I was 11, I saw one kid throwing rocks from the bridge and another waiting downstream to catch the wounded fish. That kid took a pretty good beating from one salmon, and blood was coming from his elbows and knees. But he held on to it. He got it home."

Poached salmon had a different meaning six decades ago. Back then, the sleekly muscular fish were as abundant in the rivers of Downeast Maine as crows in the skies. The fall salmon runs meant huge numbers of large fish, many returning to spawn after two years or more of fattening in the North Atlantic. Locals caught and canned the salmon, subsisting on it through the winter. Beginning in the 1950s, the river was beset each year by hordes of excitable anglers, including fly-fishing luminaries like Ted Williams, Bud Leavitt, and Lee Wulff, who would clog riverbanks and swell local coffers.

But that was then. Today, to make a long story short, the wild Atlantic salmon have all but disappeared from Maine's rivers. And Whitneyville, like many other towns in far eastern Maine, is just a ghost of what it once was.

Pennell, who still lives in Whitneyville, says that as recently as the 1960s you could pull a 30-pound salmon out of the river. Last year, according to official counts, no salmon at all were caught on the Machias River, down from just five caught in 1998. Only 29 wild Salmon returned to spawn in all seven of the Dow neast salmon rivers in 1999.

So what happened? Like in the game of Clue, there's no shortage of suspects. Scientists are eyeing these possibilities:

A decline in river quality.

The upstream Watersheds of most rivers are commercial timberlands and blueberry barrens. Heavily mechanized forestry in recent years has led to more silting, according to Nate Pennell, who works for the state soil and conservation service. What's more, blueberry growers have become more dependent on pesticides. And once free-flowing springs (which create salmon-friendly cold zones in the rivers) have been abandoned, overgrown, and silted up.

A rise in natural predators

-- among them, harbor seals and cormorants. These two salmon-eaters are as common as they are voracious along the Maine coast these days, forcing migrating fish to run a formidable gauntlet of teeth and beaks, narrowing their already long odds for survival. Officials say the number of seals is up fivefold from the early 1970s, and an estimated 50,000 pairs of cormorants now nest along the coast.
Commercial fishermen off Greenland.
Migrating fish that do make it to the open seas and survive the arduous migration north may end up in the nets of the fishermen. Although international agreements have limited the catch to domestic consumption, an estimated 19 million metric tons of salmon are still caught each year by Greenland fishermen.

The gradual rise in ocean Temperatures may be having a subtle but profound impact on Atlantic salmon, which thrives in cold waters. Salmon runs are down in Canada as well, but researchers note that the decline is less dramatic in cooler, more northerly rivers.

Efforts to aid the salmon date back to 1947, when Maine established the Atlantic Sea-Run Salmon Commission (now the Atlantic Salmon Commission) to oversee management of the fishery. By 1997 it was evident that tweaking management plans wouldn't do the trick, so the state crafted a long-range restoration plan. The idea was to assemble stakeholders -- timber and blueberry interests, anglers and conservationists -- and have them work in concert with biologists to revive the salmon runs.

Salmon in the swim of things
Photo: Gilbert van Ryckevorsel

The plan at first gained the stamp of approval of the federal government. But last November, the Department of Interior, spurred by environmentalists who had filed suit a few months earlier, abruptly shifted its position, announcing that the salmon's plight was more dire than previously thought. Maine wasn't acting fast enough, officials concluded, and the agency immediately started the process of placing the Atlantic salmon on the federal endangered species list in seven of Maine's easternmost rivers.

In Downeast Maine, the proposed listing did not go over terribly well. In fact, some residents reacted as if Interior Secretary Bruce Babbitt himself had leaned over a bridge and dropped a very large rock right on them.

"There's a million salmon within 20 miles of me right now," says Joe Robbins, a lifelong resident of East Machias. "Does that sound endangered to you?" Robbins is a committed angler who now travels to Russia to fulfill his passion for salmon fishing. He's not plagued by hallucinations or odd visions. In fact, there are about a million Atlantic salmon in the ocean waters of eastern Maine today. They're contained in floating pens at 42 sites scattered along coves and inlets along the state's coast.

Maine's easternmost county - is afflicted with the highest unemployment rate and the lowest average household income in the state. Yet the region is blessed with near-ideal conditions for raising farmed salmon, and aquaculture is one of the few bright spots in the local economy. The water's neither too cold in winter nor too warm in summer. It's clean and largely free of pathogens. And it's flushed by the highest tides in the east, which rise and fall as much as 28 feet twice daily in Passamaquoddy Bay, ridding the areas around the pens of waste and excess nutrients. The industry produces an annual harvest of 30 million pounds of restaurant-ready salmon, providing revenues of $68 million and jobs for some 750 people.

Aquaculturists say that an endangered species listing for the wild Atlantic salmon would destroy their industry in two ways. First, they say, concerns that escaped farmed salmon will breed and compete for resources with the wild fish could lead to restrictions on what types of salmon may be pen-raised. Salmon farms currently use a fast-growing European strain of salmon; a listing could force them to switch to smaller, slower-to-market native broodstock. "It could add 45 or 50 cents per pound to the cost of production," says Joe McGonigle, executive director of the Maine Aquaculture Association. Farms in Chile or Europe wouldn't be subject to the same restrictions, he adds, "so we would effectively be driven out of our own market."

The second problem is of pen location. "What the listing would do is essentially remove all aquaculture from within 20 miles of the rivers," McGonigle says. That's a problem because there is no place along this coast that's not within 20 miles of one the seven salmon rivers, unless you go straight out to sea. And that's just not practical.

Maine Gov. Angus King (I) and the state'sCongressional delegation have lashed out at the proposed listing, claiming that it's a blunt club that could deal a mortal blow to the region's economy. They've pegged their fight on a simple if melancholy notion: Wild salmon are already extinct, they claim. There's nothing left to save.

Backed with arcane scientific data, opponents of the federal listing claim that the few salmon that straggle into the rivers today aren't wild at all. They point to river stocking programs that the state has managed for decades -- all manner of salmon have been introduced to the river by well-meaning program managers, including Canadian salmon and even Pacific salmon. Over the years, listing opponents say, interbreeding has effectively eliminated the wild salmon once native to these rivers.

The fish that are left, the opponents argue, are from a mongrel horde -- part native, part introduced, only distantly related to the salmon of a century ago. One opponent told the Portland Press Herald that if the salmon were a dog, it wouldn't be recognized by the American Kennel Club. Maine officials are currently poring over genetic studies to bolster their case.

Genetic studies are so complex that some doubt that anything can be proven at all -- other than the fact that eminent scientists can argue ad infinitum over what the genetic data means. Those in favor of federal action insist that you don't need reams of data - just trust your eyes. They're quick to point out that the behavior of the local salmon strongly suggests -- if it doesn't exactly prove -- that local salmon have remained a distinct species despite the fraternizing with interlopers from the stocking program.

Case in point: Young wild salmon spawned in Maine's rivers almost invariably leave the river and spend two years away before returning to spawn, then swimming far upstream when they return to their natal rivers. Just across the border in Canada, most salmon return after one year's migration, and then tend to spawn near the mouth of the rivers. These varied behavioral traits have been fixed since people first began to notice the singular habits of these salmon, suggesting that Maine's salmon have remained a population apart throughout it all.

While the debate shifts into high gear in committee rooms and biology labs this summer, the banks along the Machias River and other area rivers will likely be as lonely as many of the shuttered Downeast villages. Fishing for Atlantic salmon was banned by the Commission statewide last fall over the objections of the state legislature, which is seeking to reverse the ban before this year's fishing season ends.

In the meantime, conservationists, government biologists, and hopeful anglers will be watching the rivers to see how many of the Atlantic salmon return from the open ocean this year.