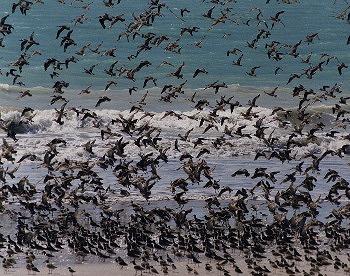 One of the world's great wildlife spectacles is under way across Australia. Two million migratory shorebirds of 36 species are gathering around Broome before an amazing 10,000 kilometer (6,200 mile) annual flight to their breeding grounds in the Northern Hemisphere. The birds are preparing to make an annual flight along the East Asian-Australasian Flyway, a route which passes through 22 countries.

But a new study shows that these migrants and Australia's one million resident shorebirds have suffered a serious long-term decline in numbers over the past 25 years.

A large scale aerial survey study covering the eastern third of the continent by researchers at the University of New South Wales has identified that migratory shorebirds populations there plunged by 73 percent between 1983 and 2006, while Australia's 15 species of resident shorebirds - such as avocets and stilts - have declined by 81 percent.

"This is a truly alarming result: in effect, three-quarters of eastern Australia's millions of resident and migratory shorebirds have disappeared in just one generation," says an author of the report, Professor Richard Kingsford.

"Loss of wetlands due to river regulation is one of the more significant contributors to this drastic decline, but it appears such a threat is largely unrecognized in Australia's conservation plans and international agreements," says Professor Kingsford, who co-authored the report with Silke Nebel and John Porter, of the University of New South Wales School of Biological, Earth and Environmental Sciences.

Many birds have already set off - including a bar-tailed godwit carrying a small transmitter. The GPS tag allows researchers to follow its route from Broome in northwestern Australia as it travels to breeding grounds in Alaska. The bird 'H8' was last sighted on April 11 entering the Yellow Sea in China, after traveling around 5,000 km (3,000 miles).

The Yellow Sea provides rich feeding habitat for more than three million migratory birds annually, and is a key refuelling stop. A total of 36 species pause here to rebuild their energy reserves before continuing on their migrations.

For birds, the IUCN Red List is maintained by BirdLife International. The last assessment showed one in eight of the world's 10,000 bird species are at risk of extinction.