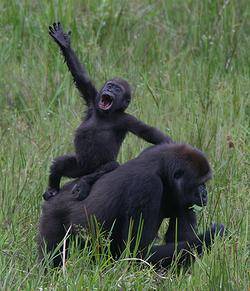 Unknown to the outside world, more than 125,000 endangered western lowland gorillas have sheltered in the remote northern forests of the Republic of Congo in Central Africa, the Wildlife Conservation Society revealed today. Documented by WCS and Congolese scientists, the discovery of these imperiled animals shows that there is hope for the conservation of other endangered species, scientists said.

The new census of these Critically Endangered gorillas was revealed at a press conference during the week-long International Primatological Society Congress in Edinburgh. The census found more than 125,000 western lowland gorillas living in two adjacent areas covering 18,000 square miles.

"These figures show that northern Republic of Congo contains the mother lode of gorillas," said Dr. Steven Sanderson, president and chief executive of the Wildlife Conservation Society. "This discovery should be a rallying cry for the world that we can protect other vulnerable and endangered species, whether they be gorillas in Africa, tigers in India, or lemurs in Madagascar," Sanderson told reporters.

Successful long-term conservation management of the country's protected areas is partly responsible for the survival of these gorillas, and the remoteness and inaccessibility of some of their key locations as well as a food-rich habitat contributed to their survival, WCS said.

WCS has worked with the government of Republic of Congo in the northern area of the country for nearly 20 years, helping establish the Nouabalé-Ndoki National Park and manage the Lac Tele Community Reserve while working with logging companies outside of protected areas to reduce illegal hunting.

Western lowland gorillas inhabit parts of seven Central African nations. Estimates from the 1980s placed the entire world population of these gorillas at fewer than 100,000. Scientists had believed that over the past 25 years this number had been cut in half by hunting and disease.

The new census that documented the existence of an additional 125,000 gorillas was the result of intensive field work carried out by the Bronx Zoo-based WCS and the government of Republic of Congo.

Researchers combed rainforests and isolated swamps to count the sleeping nests gorillas construct each night from leaves and branches.

In the Ntokou-Pikounda region researchers found 73,000 gorillas, and another 52,000 were documented in the Ndoki-Likouala landscape - including a previously unknown population of nearly 6,000 animals living in an isolated swamp.

Population densities of eight gorillas per square kilometer were recorded in one particularly rich forest patch, which ranks among the highest gorilla densities ever recorded. WCS cautioned that many of the gorillas live outside of existing protected areas, though the government of Congo has committed to creating a new national park in the Ntokou-Pikounda region.

Across Central Africa, gorillas are threatened by hunting for bushmeat and the spread of the deadly Ebola virus, which kills apes as well as humans. WCS is working with partners to combat Ebola, eliminate commercial hunting, and secure this last stronghold for Africa's apes.