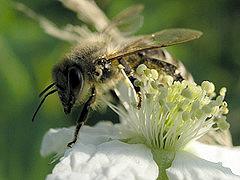 The German organization Coalition against Bayer Dangers today brought legal action against Werner Wenning, chairman of the Bayer AG Board of Management, by filing a charge against him with the public prosecutor in Freiburg. The group accuses Bayer CropScience of "marketing dangerous pesticides and thereby accepting the mass death of bees all over the world."

The coalition filed the charge in cooperation with German beekeepers who claim they lost thousands of hives after poisoning by the Bayer pesticide clothianidin in May.

Since 1991, Bayer has been producing the insecticide imidacloprid, which is one of the best selling insecticides in the world, often used as seed-dressing for maize, sunflower, and rape. Bayer exports imidacloprid to more than 120 countries and the substance is Bayer's best-selling pesticide.

Since patent protection for imidacloprid has expired in most countries, Bayer in 2003 brought a similarly functioning successor product, clothianidin, onto the market, the coalition alleges. Both substances are systemic chemicals that work their way from the seed through the plant. The substances get into the pollen and the nectar and can damage beneficial insects such as bees.

The coalition alleges that the start of sales of imidacloprid and clothianidin coincided with the occurrence of large-scale bee deaths in many European and American countries. Up to 70 percent of all hives have been affected. In France, approximately 90 billion bees died over the past 10 years, reducing honey production by up to 60 percent.

Attorney Harro Schultze, who represents the Coalition against Bayer Dangers said, "The public prosecutor needs to clarify which efforts Bayer undertook to prevent a ban of imidacloprid and clothianidin after sales of both substances were stopped in France. We're suspecting that Bayer submitted flawed studies to play down the risks of pesticide residues in treated plants."

In France, imidacloprid has been banned as a seed dressing for sunflowers since 1999 and in 2003 was also banned as a sweet corn treatment. Convened by the French government, in 2003 the Comité Scientifique et Technique declared that the treatment of seeds with imidacloprid leads to significant risks for bees. Bayer's application for approval of clothianidin was also rejected by French authorities.

Clothianidin and imidacloprid are two of a relatively new class of insecticides known as neonicotinoids that impact the central nervous system of insects. The coalition is demanding that Bayer withdraw all neonicotinoids from the market worldwide.

"With an annual turnover of nearly 800 million euro, neonicotinoids are among Bayer's most important products," said Philipp Mimkes, spokesman for the Coalition Against Bayer-Dangers. "This is the reason why Bayer, despite serious environmental damage, is fighting against any application prohibitions."

Germany banned neonicotinoids for seed treatment in May 2008, due to negative affects on bee colonies. Beekeepers in the Baden-Württemberg region suffered a severe decline linked to the use of clothianidin.

Bayer says the pesticide entered the environment because farmers failed to apply an adhesive agent that affixes the compound to the seed coats. Without the fixative agent, Bayer says, the compound drifted into the environment from sown rapeseed and sweet corn and then affected the honeybees.

Dr. Richard Schmuck, an ecologist at Bayer CropScience, said in June, "All studies available to us confirm that our product is safe to bees if the recommended dressing quality is maintained. This is also shown by the product safety assessments which we have submitted to the registration authorities."

"When used correctly," he said, "this crop protection product is safe for operators, consumers and the environment and fulfills the international criteria with regard to ecological systems."

In the United States, the nonprofit Natural Resources Defense Council filed a lawsuit August 15 in federal court in Washington, DC to force the federal government to disclose studies it ordered on the effect of clothianidin on honey bees. Colony collapse disorder has claimed more than one-third of honey bees in the United States since it was first identified in 2006.