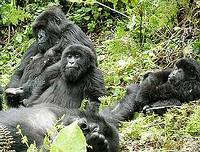 The Gorilla Sector of Virunga National Park is inhabited by 200 of the last remaining 700 critically endangered mountain gorillas in the world. Since September 2007, it has been occupied by rebels who had driven the rangers out.

"It is a huge step that all sides have agreed that the protection of Virunga as a World Heritage Site and its mountain gorillas is of sufficient priority to transcend political differences," said Virunga Park Director Emmanuel de Merode.

"Rangers are neutral in this conflict, and it is right that they should be allowed to do their job," he said.

The Congolese Wildlife Authority and its Rangers work throughout the country to protect the National Parks of Congo and their wildlife from poachers, rebel groups, illegal miners and land invasions.

Fighting between rebels loyal to Laurent Nkunda and the army has been intermittent in the Virunga area for over a year, but the conflict intensified late in October, bringing renewed instability and chaos to the park, including the Gorilla Sector.

Since October 26, all rangers from other park stations in the southern sector of Virunga, including Rumangabo headquarters, had fled and were living in a refugee camp near the city of Goma.

The Gorilla Sector was attacked repeatedly in 2007 during which 10 mountain gorillas were killed. It was attacked in January 2007, when two Silverbacks were killed. An adult female was executed in June 2007 and in July 2007, five were massacred causing an international outcry.
In September, a dead infant female was found in the hands of alleged traffickers.

The re-establishment of a ranger presence in Virunga National Park is paramount to the protection of the plants and animals in the park, said de Merode.

Virunga is Africa's oldest national park. Established in 1925, it has been a UNESCO World Heritage Site since 1979 stretching across 7,800 square kilometers in the eastern part of the country.

Now that the rangers are back in the park, they are planning to take a census of the habituated mountain gorillas. These are animals that have become accustomed to the presence of humans and are the ones visited by the tourist groups whose purchases supply much of the money for protection of the area.

The last census in August 2007 indicated there are 72 habituated gorillas, but this figure is expected to have changed due to births, death, and interactions, park officials say.

Mountain Gorillas are critically endangered, with only 700 remaining in the world, about 380 in the Virunga Volcanoes Conservation Area, which is shared by DRC, Rwanda and Uganda, and 320 in the Bwindi Impenetrable Forest of Uganda.

Despite the conflict in the region, their decline had been reversed up until January 2007 thanks to international support and courageous conservationists coupled with the popularity of gorilla-watching tourism, said de Merode.

Some 1,100 park rangers protect the National Parks of Eastern Congo, which are inhabited by mountain gorillas, chimpanzees, forest elephants and rhinos.

Despite a 10-year civil war and current political instability, the rangers have remained active in protecting these parks, four of which have been classified as World Heritage Sites by UNESCO.