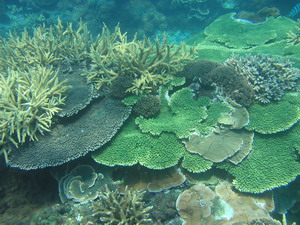 Thousands of delegates from 72 countries have gathered in Manado for a conference on coastal and marine resources that will conclude Friday with a plan of action to safeguard the largest marine reserve in history, the Coral Triangle Initiative.

From the Philippines in the north to Indonesia in the south, the Coral Triangle supports the world's greatest density of marine life, more than 600 species of reef-building corals and the world's largest population of commercially important tuna species, supplying 50 percent of global tuna production.

This ocean expanse covers an area of 2.3 million square miles (5.7 million km2). It is inhabited by more than 3,000 species of reef fish. Over 150 million people live within the Coral Triangle, of which an estimated 2.25 million fishers are dependant on marine resources for their livelihoods.

To protect this vulnerable area from the impacts of global warming, foreign affairs ministers from the six countries bordering the Coral Triangle - Indonesia, Malaysia, Papua New Guinea, the Philippines, the Solomon Islands and Timor Leste - are in Manado for the first coral summit, with sessions all this week.

On Friday, the six heads of state are expected to adopt a regional plan of action that will serve as a blueprint for their cooperation on sustainable management of coastal and marine resources.

The six countries already have agreed to set up a mechanism to combat coral bleaching and establish a Coral Bleaching Alert Network supported by satellite surveillance by the U.S. National Oceanic and Atmospheric Administration.

"The Coral Triangle Initiative is one of the most important marine conservation measures ever undertaken anywhere in the world and the first to span several countries," said Professor Terry Hughes, director of Australian Research Council's Centre of Excellence for Coral Reef Studies, who is at the Coral Triangle meeting today in Manado.

"It is as much about nation building and food security as it is about reef conservation," he said.

Experts have warned that the world's coral reefs may be depleted by 2050 if no immediate action is taken to protect them.