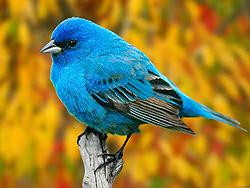 The National Audubon Society Chicago Region has been awarded $88,310 by the federal government and partners will match with $265,170 to return publicly owned hayfields and degraded grasslands surrounding the city of Chicago to a diverse prairie habitat, greatly increasing numbers of neotropical migrant grassland birds. The Eastern kingbird, cedar waxwing, common nighthawk, indigo bunting, and red-tailed hawk are among the birds that use these grasslands.

Partners will match the federal funds with more than $18 million that will support habitat restoration, environmental education, population monitoring, and other priority activities within the ranges of neotropical birds in the United States, Puerto Rico, Canada, Mexico and 12 Latin American and Caribbean countries.

Neotropical describes one of the world's eight terrestrial ecozones. This ecozone includes South and Central America, the Mexican lowlands, the Caribbean islands, and southern Florida, which all share a large number of plant, bird and animal groups.

Plovers, terns, hawks, cranes, warblers and sparrows - nearly 350 species of neotropical migratory birds breed in the United States and Canada and winter in Latin America. Many of these birds are in decline and several species are currently protected as threatened or endangered under the U.S. Endangered Species Act.

The Neotropical Migratory Bird Conservation Act of 2000 established the matching grants program to fund projects promoting the conservation of neotropical migratory birds in the United States, Canada, Latin America, and the Caribbean. Funds may be used to protect, research, monitor and manage bird populations and habitat, as well as to conduct law enforcement and community outreach and education. By law, at least 75 percent of the money goes to projects in Latin America, the Caribbean, and Canada, while the remaining 25 percent can go to projects in the United States.

As one of this year's grants, the Institute for Bird Populations, a California nonprofit organization, will receive a of $196,216, which will be matched by partner funds of $957,600, to help operate 40 long-running neotropical migrant monitoring stations and establish and operate 10 new stations to fill geographic information gaps, increase sample sizes and provide baseline data for newly protected areas in California, Mexico, Central and South America.

Click here for more about these projects, plus the 27 projects in Mexico, Central and South America.