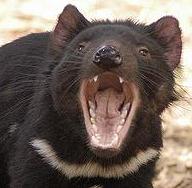 One of Australia's iconic native species and the world's largest surviving marsupial carnivore was today reclassified as closer to extinction under Australia's national environment law.

Environment Minister Peter Garrett announced that the Tasmanian devil now will be listed as Endangered instead of Vulnerable. Garrett said the uplisting means the species is under continued threat and the population is continuing to decline and also that the species will get greater protection under national environment law.

"My decision to uplist the Tasmanian devil is based on advice from the Threatened Species Scientific Committee which lists the devil facial tumour disease as the major threat to the devil," said Garrett. "This disease has led to the decline of about 70 percent of the Tasmanian devil population since the disease was first reported in 1996." The invariably fatal cancer appears to be passed directly from animal to animal by biting.

The minister said. "The Australian Government has already committed $10 million over five years to the Save the Tasmanian Devil program. This is to help with research into disease transmission and treatment, and will support captive and wild populations."

Now found only on the island of Tasmania, these meat-eating marsupials once roamed widely across Australia and on islands around the coast.

Tasmanian Devil Conservation Park in southeast Tasmania about an hour from Hobart is the only wildlife center in an isolated disease-free area. Established in 1978 as the world's first Tasmanian devil center, the park is involved in research to help solve the disease problem, while encouraging visitors to experience the presence of Tasmanian devils.

Seeing a Tasmanian devil in the wild is difficult as they are nocturnal creatures with a furtive nature. Devils have strong jaws and are famous for their snarling aggressive behavior at feeding and mating times.

New conservation voluntourism programs, new wildlife tours and interpretation in seven languages are key parts of a radical makeover at Tasmanian Devil Conservation Park.
The new programs will be introduced to the international travel industry at the Australian Tourism Exchange in Melbourne in mid-June.

"Our innovative multilingual interpretation will take visitors deeply into the world of the devil while also addressing cutting edge conservation," said park founder and director John Hamilton. "We are aiming to be a yardstick for 21st century wildlife centers while at the same time playing a major role in saving the endangered Tasmanian devil。"

Australia is inhabited by between 600,000 and 700,000 species, many of which are found nowhere else in the world. About 84 percent of the continent's plants, 83 percent of mammals, and 45 percent of birds are only found in Australia.