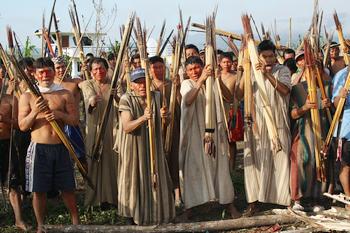 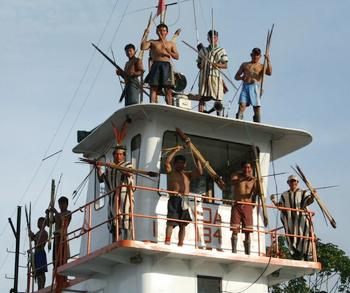 After more than six weeks of protests by Peru's Amazonian indigenous groups that have included blockades of major roads and waterways and the shutting down an oil pipeline pumping station, the Peruvian government has begun to crack down.

During the past two weeks, the administration of President Alan Garcia has declared a state of emergency in the country's Amazon provinces, issued a decree allowing the military to help the national police maintain order there, and charged the protest's leaders with crimes against the state.

The protests, which have involved more than 10,000 men, many of them in war paint and armed with bows and arrows, are being coordinated by the Peruvian Rainforest Inter-Ethnic Development Association, AIDESEP, an umbrella group that represents most of the country's approximately 50 Amazonian indigenous ethnicities.

AIDESEP's leaders are demanding the repeal of nine legislative decrees issued last year that they claim will facilitate the deforestation and privatization of their traditional lands and natural resources.

The laws that AIDESEP objects to were part of a package of more than 100 decrees that President Garcia signed last year in order to get Peru into compliance with a Free Trade Agreement that the country made with the United States. During the past week, various of the country's ministers have warned that repealing those decrees could endanger the Free Trade Agreement, which went into effect early this year.

But according to Congressman Roger Najar, the president of the Congressional Commission of Andean and Amazonian Peoples, the decrees in question have nothing to do with the Free Trade Agreement. He claims that they are simply part of the Garcia administration's agenda to open the country's Amazon region up to large-scale foreign investment.

The current conflict seemed headed for resolution a month ago, after just two weeks of indigenous protests,when AIDESEP's leaders gained promises of cooperation from the President of the Congress and Garcia's Chief of Staff Yehude Simon (ENS April 23, 2009), but those negotiations soon broke down.

President Garcia has largely ignored the protesters, leaving it to his chief of staff and ministers to defend the decrees. However, in a public event on May 16, he lamented the position of AIDESEP's leaders and reminded the audience that, "The Amazonian lands belong to the entire nation, not to a small group that lives there."

Eastern Peru comprises about 16 percent of the Amazon rainforest , one of its most biologically diverse regions , and is home to more than 350,000 indigenous people from some 50 ethnic groups.

Protesters from the Ashanika tribe who occupied an airstrip and took over oil company boats near the Amazonian town of Atalaya claimed that Garcia neither understands, nor is interested in their views. They complained about logging concessions near their villages and water pollution caused by oil companies, citing a major fish kill on the Urubamba River in December of 2007.