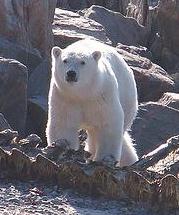 A way of tracking polar bears developed by Queen's University researchers is expected to shed more light on the threatened Arctic animal and help boost the economy of Canada's north.

Biologists Peter V.C. de Groot and Peter Boag say their method of integrating the traditional knowledge of Inuit hunters with state-of-the-art genetic DNA analysis is cheaper and much easier on the bears than the current tracking practice, in which they are spotted from helicopters, tranquilized and marked.

"The data from current aerial monitoring methods may be becoming less accurate with increased sea ice changes caused by global warming, and we need a more sensitive tool to monitor Canada's bear populations," says Dr. de Groot. The Queen's researchers are using a multi-phased approach to create a clearer picture of the polar bear population.

First, a number of "hair traps," fenced enclosures baited with meat, will be set up about 15 kilometers (nine miles) apart across a 600 kilometer (370 mile) area.

Bits of hair left behind by the bears as they attempt to reach the meat are sent to Dr. Boag's lab, where the number and sex of the animals are determined using DNA markers.

The Queen's team has received up to $500,000 from the federal Ministry of Indian and Northern Affairs to refurbish and upgrade research cabins in the McClintock Channel, west of Baffin Island, in prime polar bear habitat.

Local laborers will be employed to haul building materials hundreds of kilometers by skidoo, and set up the cabins. Coupled with ongoing polar bear surveys in which local residents set up the sampling stations and analyze tracks, this work is expected to provide an economic boost for the communities involved.

When the refurbished huts ?each equipped with wind turbines, generators, heaters and 15 beds ?are not being used for research, Inuit hunters may be able to bring in eco-tourists by skidoo to observe the bears in their natural habitat.

Polar bears across the Arctic are imperiled due to overharvesting and climate change, experts report. In McClintock Channel, 284 bears were counted in 2000.

There are currently 19 populations of polar bears in the Arctic - in Canada, Alaska, Russia, Norway and Greenland. Thirteen of these populations live wholly or partially in Canada, from the Ontario coast of Hudson Bay north to Ellesmere Island, Nunavut, and from the northern Yukon in the west to Labrador in the east.

Because population estimates are costly to obtain in the Arctic, census data is scarce for some polar bear populations. The current overall estimate is of 20,000 to 25,000 wild polar bears, with about 15,000 living in Canada.