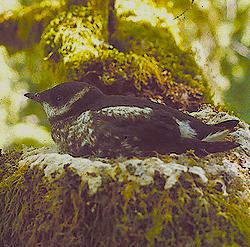 The U.S. Fish and Wildlife Service has released a five-year report finding that continued protection of marbled murrelets in Washington, Oregon, and California is required under the Endangered Species Act.

The marbled murrelet, Brachyramphus marmoratus, is a small seabird that nests in old-growth forests along the Pacific Coast of North America. In 1992, the Fish and Wildlife Service listed the marbled murrelet population in Washington, Oregon, and California as a threatened species under the Endangered Species Act due to logging of its old-growth habitat.

"After a thorough review of the best available scientific and commercial information, the status of marbled murrelets in Washington, Oregon and California has not changed and the recovery criteria for removing the species from the federal list of threatened and endangered species have not been met," said Ken Berg, supervisor of the Service's Washington State Office.

The report concludes that, "The species decline has been largely caused by extensive removal of late-successional and old-growth coastal forest which serve as nesting habitat for murrelets."

It comes as Obama administration officials reconsider a Bush administration decision to increase logging of murrelet habitat in old-growth forests in western Oregon.

"Today's report affirms the need to protect old-growth coastal forests used by this seabird to nest and raise their young - yet another in a growing list of reasons that the Obama administration should withdraw the Western Oregon Plan Revisions," said Kristen Boyles, an Earthjustice attorney.

The report finds a 26 percent decline in the Washington, Oregon, and California marbled murrelet population since 2002. It also admits that the genetically distinct central California population has declined by 75 percent since 2003.

The timber industry has filed multiple lawsuits to remove protections from the murrelet. To date, those lawsuits have been unsuccessful.

With the new report confirming that the murrelets are in decline, the Fish and Wildlife Service has moved to dismiss the last of the pending timber industry cases.