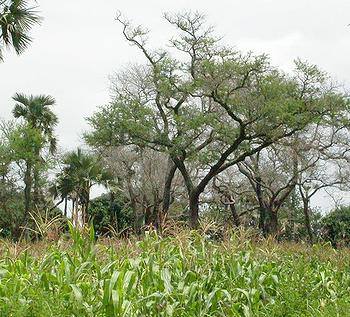 Delegates heard an urgent message from founder of the Greenbelt Movement and 2004 Nobel Peace Prize Laureate Wangari Maathai, who emphasized the importance of planting trees to help Africa adapt to the extreme weather conditions brought by climate change.

In May, the Carbon Benefits Project was launched by UNEP and the World Agroforestry Centre. Funded by the Global Environment Facility, this multi-million dollar project is developing tools for measuring terrestrial carbon storage, particularly on complex landscapes.

The project "could become the key to unlocking the multi-billion dollar carbon markets for millions of farmers, foresters and conservationists across the developing world," Maathai said. "Farming carbon to combat climate change is an exciting prospect."

One tree species emerged as the darling of the World Agroforestry Congress.

With its nitrogen-fixing qualities, the tall, long-lived acacia tree, Faidherbia albida, could limit the use of chemical fertilizers; provide fodder for livestock, wood for construction and fuel, and medicine through its bark, as well as windbreaks and erosion control to farmers across sub-Saharan Africa.

The fast-growing tree demonstrates the benefits of planting trees on farms and is adapted to a wide array of climates and soils from the deserts to the humid tropics, said the scientists at the meeting.

Unlike other trees, Faidherbia sheds its leaves and goes dormant during the early rainy season. Its leaves grow again only in the dry season, so it is compatible with food crops because it does not compete with them for water, nutrients or light.

Faidherbia albida is important for raising bees, since its flowers provide bee forage at the close of the rainy season, when most plants in the Sahel do not.

The Agroforestry Centre's research showed that in Malawi maize yields increased by 280 percent in the zone under the tree canopy compared with the zone outside the tree canopy.

The Faidherbia research was welcomed by Kenyan officials, environmentalists and agronomists at a time when Kenya is asking for emergency food aid in order to prevent widespread famine. Pushed up by shortages, the price of the maize, the staple food here, has doubled over the past year.