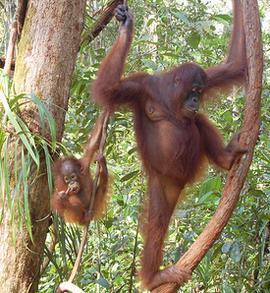 "Climate change has catapulted forests onto the international agenda after years of languishing in the dusty corridors of UN meetings," Dr. William Jackson told the World Forestry Congress in Buenos Aires today.

Deputy Director General of the International Union for the Conservation of Nature, IUCN, Dr. Jackson said the continued global decline in forest area and quality, particularly in the tropics, has serious social, economic and ecological consequences. But he sees hope for forests in the urgency of tackling global warming.

Given the rate at which climate change is happening, no country, rich or poor, can afford to neglect its forests, Jackson told conference delegates at La Rural exhibition center. "We must seize this moment to promote the sustainable management of forests and to develop sustainable livelihoods for the people who depend on forests."

Deforestation generates about 20 percent of global greenhouse gas emissions, and halting forest loss has been identified as one of the most cost-effective ways to help the world forestall runaway climate change.

The week-long 13th World Forestry Congress, organized by the government of Argentina in collaboration with the Forestry Department of the United Nations Food and Agriculture Organization, has attracted some 4,500 participants from more than 160 countries.

The first World Forestry Congress was held in Rome in 1926 and the gathering has since taken place every six or seven years in different host countries.

The speeches, workshops, round-table discussions, poster presentations, parallel events, exhibits, study and technical tours provide a forum for the exchange of personal experiences and for discussions on topics related to the conference theme, "Forests in development - a vital balance."

WWF International's Forests Director Rodney Taylor urged Congress participants to support a global target of zero net deforestation by 2020, a target that "sets the scale and urgency with which these threats need to be tackled to maintain the health of the planet."

Zero net deforestation does not mean zero deforestation but acknowledges that some forest loss could be offset by forest restoration and afforestation on degraded lands.

"This is an opportunity to build consensus on how the forest sector can help achieve an early peak of greenhouse gas emissions and a rapid 80 percent decline in emission levels by 2050," Taylor said. "But this is a global target, and we can only do it together."

"The forest sector, for its part, can contribute through the conservation and sustainable use of forests, but the foresters cannot do it alone," Taylor said. "The integration of other sectors, particularly agriculture, energy and finance, is key for formulating sustainable land-use policies and planning processes."

He says a zero net target "leaves room for change in the configuration of the land-use mosaic, provided the net quantity, quality and carbon density of forests is maintained."

In particular, governments must bolster this commitment by backing the REDD mechanism. Reducing Emissions from Deforestation and forest Degradation in Developing Countries, REDD, is a mechanism to provide financial incentives on a global scale to conserve forests rather than convert them.

"Rich countries can provide funds to support developing countries in their efforts to curb deforestation, through REDD initiatives," Taylor said. "All governments should support the inclusion of a REDD mechanism as a credible and compensated form of emissions reductions within a post-2012 UN climate treaty."

Paying to conserve billions of tons of carbon stored in tropical forests could not only protect the climate, but also protect orangutans, pygmy elephants, and other wildlife at risk of extinction, according to a study published in June in the peer-reviewed journal "Conservation Letters." Authored by Oscar Venter, a biologist at Autralia's University of Queensland, it is one of the first to offer quantitative evidence linking the drive to reduce carbon emissions from forests with the push to preserve threatened mammal biodiversity.

"We now need to see policy discussions catch up with the science, because at the moment the potential cobenefits of linking forest protection to biodiversity are not getting the attention they deserve," said Venter.