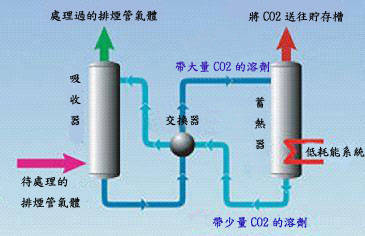 The world's largest pilot plant for the capture of carbon dioxide (CO2) from a conventional power station was opened in Denmark today. It is the first installation in the world to capture the CO2 in the flue gases of a coal-fired power station, so they cannot enter the atmosphere and produce the greenhouse effect responsible for global warming. The pilot project at the Elsam power station near Esbjerg, will demonstrate new technology for capturing carbon dioxide emissions as they are produced by power stations and then storing the CO2 emissions underground.

CASTOR, which stands for CO2 from Capture to Storage, is an European initiative grouping 30 partner industries, research institutes and universities from 11 European countries.

Carbon capture and storage technology is viewed as a bridge from the current fossil fuel-based energy system to one that has near-zero carbon emissions. "By developing technologies for carbon capture and storage, we can reduce emissions in the medium-term as we move to large scale use of renewable, carbon-free energy source," said European Science and Research Commissioner Janez Potocnik.

The pilot CO2 capture unit, coordinated by the Institut Français du Pétrole (IFP), will be operated for two years to demonstrate a new technology on a scale large enough to ensure reliable industrial application.

The CO2-rich solvent is then fed to a regenerator. The device is heated to 120 degrees Celsius in order to break the bonds between the CO2 and the solvent. The CO2 is then isolated and transported to its storage place. The solvent, restored to its initial form as CO2-poor solvent, is reinjected into the absorber with more flue gases to be treated.

The other components of the flue gas are discharged from the absorber with the 10 percent of the CO2 that was not absorbed by the solvent. The pilot facility will use a system that can be regenerated with a limited quantity of energy, reducing the generation of secondary CO2.

The pilot installation is intended to capture one metric ton of CO2 per hour.

The cost of conventional processes for CO2 capture in the flue gases of large industrial facilities, already operational in Japan, is estimated at between €50 and €60 per metric ton of CO2. The Elsam industrial pilot is expected to halve the cost per ton of CO2 avoided, to between €20 and €30.

The total pilot project cost of €16 million is about half funded by the European Commission, with the remainder being funded by private partners.