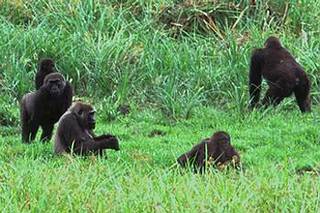 The parasite that causes malaria in humans has been found in gorillas, along with two new species of malaria parasites, reports a study by French and American scientists.

Malignant malaria is an infectious disease that puts the sick person through cycles of chills, fever, and sweating. It is transmitted to humans by the bite of a female anopheles mosquito infected with P. falciparum.

Malaria caused by this parasite is a leading cause of death and disease globally, particularly among young children. P. falciparum is responsible for 85 percent of malignant malaria infections in humans and nearly all deaths from the disease.

The researchers cautioned that increased contact between primates and humans, mostly due to logging and deforestation, creates a greater risk of new parasites being transmitted to humans.

The discovery could aid the development of a vaccine for malaria, which each year causes two million infant deaths and sickens about 500 million people, mostly in sub-Saharan Africa.

The discovery also furthers understanding of how infectious diseases such as HIV, SARS, and avian and swine flu can be transmitted to humans from animals.

Simultaneously, a group of Australian researchers has published a study identifying a group of proteins that could form the basis of an effective vaccine against malaria.

"As well as presenting an enormous health burden, malaria also has a major impact on social and economic development in countries where the disease is endemic," Dr. Beeson said.