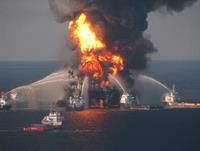 An oil rig that exploded Tuesday night and burned for 36 hours sank in the Gulf of Mexico this morning, leaving responders with a potentially enormous oil spill on their hands.

The Deepwater Horizon, owned by the Swiss company Transocean Ltd. and contracted by BP Exploration & Production, Inc., had drilled an exploratory well down to its limit of 18,000 feet. The well was being closed when the incident occurred at 10 pm Tuesday local time, about 41 miles offshore Louisiana and 130 miles southeast of New Orleans.

The well is still unplugged and could potentially release up to 8,000 barrels of crude oil per day, said Coast Guard officials. In addition, over a million gallons of #2 fuel oil or marine diesel fuel was reported to be onboard the rig when it went down.

Transocean said in a statement, "The combined response team was not able to stem the flow of hydrocarbons prior to the rig sinking, and we are working closely with BP Exploration & Production, Inc. and the U.S. Coast Guard to determine the impact from the sinking of the rig and the plans going forward."

"The U.S. Coast Guard has plans in place to mitigate any environmental impact from this situation," the company said.

Meanwhile, hope is fading that 11 crewmembers who are still missing will be found alive. Coast Guard officials said today that 17 search sorties have been completed by air and by boat and approximately 1,940 square miles have been searched.

The Coast Guard today expanded its search area to include 3,000 square miles around where the platform's location. But the search is expected to be called off sometime on Friday.

Transocean Vice President Adrian Rose said today that crew members who survived Tuesday's explosion indicated the missing men may have been near the blast and unable to escape.

The National Response Team has been activated and Unified and Area Commands have been established near New Orleans to coordinate search and rescue operations and oil spill response efforts. Deputy Secretary of the Interior David Hayes arrived yesterday to assist with coordination and response.

BP today activated an extensive oil spill response, assisting Transocean in an assessment of the well and subsea blow out preventer with remotely operated vehicles.

Hayward said BP has a plan for the drilling of a relief well, if required. A nearby drilling rig available to begin activity immediately will be used to drill the relief well.

BP says it has supplies of more than 100,000 gallons of chemical dispersants and four aircraft ready to spray dispersant to the spill, and the pre-approval of the US Coast Guard to use them.

BP has implemented pre-planned forecasting of 48-hour spill trajectory, which indicates spilled oil will remain well offshore during that period; and has pre-planned the staging of resources for protection of environmentally sensitive areas.

The cause of the fire and explosion is unknown at this time. An investigation into the cause of the incident and assessment of the damage will be conducted in the days or weeks to come.

After saying that his thoughts and prayers are with the family members and loved ones facing the tragic situation in the Gulf of Mexico, the President directed the entire federal government to offer all assistance needed in the rescue effort and in mitigating and responding to the environmental impact as "the number one priority."

The President asked the responding departments to devote every resource needed to respond to this incident and investigate its cause. He thanked the brave responders and government officials "who have worked non-stop over the last two days to save lives and protect the environment."