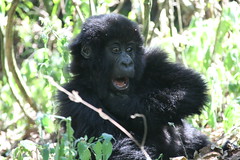 The international body that oversees World Heritage Sites today requested the cancellation of oil exploration permits in Virunga National Park in the Democratic Republic of the Congo.

Some of the permits are held by international petroleum conglomerates, including UK-based Soco International PLC and French oil giant Total SA.

Virunga is Africa's oldest national park and one of the continent's first World Heritage Sites. It was inscribed in 1979 in recognition of its extraordinary landscapes, and because it is inhabited by more species than any other place in the continent.

The World Heritage Committee, a rotating group of 21 countries that manages the UNESCO World Heritage List, said it is deeply concerned that Virunga could be degazetted or that laws could be changed so that oil concessions covering 85 percent of the park's territory could be exploited.

Conservation organizations warn that oil exploration could cause the site to lose its World Heritage status and would put in peril local livelihoods and rare species.

Total last month promised to stay out of the park's current boundaries, but remains active just outside its borders.

The global conservation organization WWF said today, "Soco International PLC has not made a commitment to respect the integrity of the park."

But in a statement on its website, Soco clarified its position. "Block V encompasses an area of the Virunga National Park, a World Heritage Site, which includes part of Lake Edward. SOCO's area of interest is the lowland savannah area around Lake Edward and the lake itself."

"It is emphasised that Block V is not located within the mountainous Mikeno Sector, home to the famous Mountain Gorillas. This has been subject to much inaccurate media speculation. Furthermore, SOCO has stated it will never seek to have operations in the Mountain Gorilla habitat, the Virunga Volcanoes or the Virunga equatorial rainforest," the company said.

"Virunga National Park is one of the last places on Earth you should go looking for oil," said René Ngongo, mining and extractives policy advisor at WWF-DRC.

"The park is of global conservation importance and is vital for the livelihoods of many people living around it," said Ngongo. "We are urging alternative development models that are sustainable for the long term – development that provides real benefits to local communities and does not put endangered species at risk."

"The World Heritage Committee has made it clear today that these precious places are no-go areas for damaging extractive activities," said Christof Schenck, CEO of Frankfurt Zoological Society. "Oil exploration could destroy Virunga forever and must not go forward."