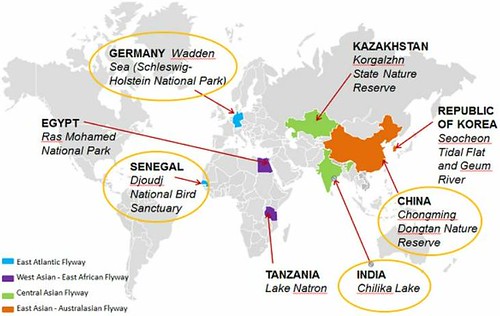 Bird-loving tourists can help to conserve the birds that entice them far from home. This year, for the first time, World Migratory Bird Day is linking sustainable tourism with conservation of the 50 billion migratory birds now transiting their flyways around the world.

Many migratory bird species are in decline, threatened by habitat destruction and degradation, illegal and unsustainable hunting, infrastructure development, climate change and disease. Flyways provide a framework for international collaboration and focus attention on the needs of migratory birds.

Through the new Destination Flyways project led by the UN World Tourism Organization and introduced on World Migratory Bird Day, these long-distance traveling birds will benefit from tourism, when it supports local economies that can then afford to reject other, less environmentally-friendly sources of income.

One of the eight sites selected for the Destination Flyways project is Lake Natron in Tanzania’s remote north near the Kenyan border. Inhabited by 75 percent of the world’s population of the Lesser Flamingo, Lake Natron is the only breeding ground for this species in East Africa.

By providing an adequate framework for sustainable tourism management and diversifying the tourism offered along the flyways, Destination Flyways aims to generate revenue for improved management of biodiversity and spread the benefits of tourism to local communities, while creating attractive experiences for tourists.

Along with Lake Natron, seven other bird sites and habitats in China, Egypt, Germany, India, Kazakhstan, South Korea and Senegal have been shortlisted for inclusion in the Destination Flyways project.

“Tourism has a major responsibility in advancing biodiversity protection,” said World Tourism Organization Secretary-General Taleb Rifai. “The UNWTO-led Destination Flyways Project is a perfect example of how tourism and biodiversity can benefit from each other.”

“On this World Migratory Bird Day, we invite all to help us turn one billion tourists into one billion opportunities to protect the world’s original long-distance travellers,” said Rifai.

Held every year on the second weekend in May, the World Migratory Bird Day this year was celebrated in more than 70 countries.

The weekend leads to a year full of activities that support the survival of the 1,850 bird species that migrate from one location to another in a regular seasonal movement, often north and south along a natural flyway between breeding and wintering grounds.

“This year’s theme of Destination Flyways reinforces some of the key ways in which the BirdLife Partnership works, linking local communities to save sites, species and habitats in a coordinated way and enhancing local livelihoods,” Thompson said.

“Bird-watching is an important component of a global multi-million dollar wildlife-watching industry and provides a significant source of income and employment for a growing number of communities, especially in developing countries,” said CMS, the Convention on the Conservation of Migratory Species of Wild Animals, Executive Secretary Bradnee Chambers

World Migratory Bird Day began in 2006 as an annual awareness-raising campaign. On the second weekend each May, people around the world take action and organize public events such as birdwatching trips, bird festivals, exhibitions and painting competitions.

Eight Destination Flyway project sites along four of the world’s flyways have been preselected with partners. For each site, extensive data collection and identification of the way forward together with local partners are in progress.