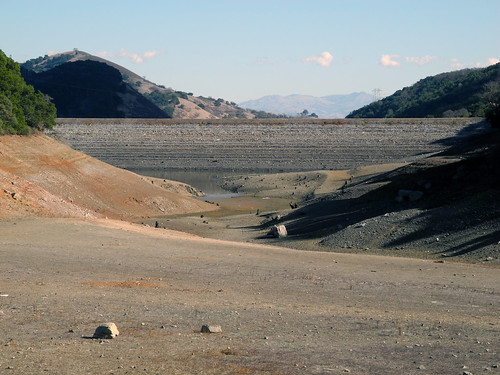 The severe drought gripping the western United States is changing the land beyond the localized effects of water restrictions and browning lawns.

Scientists at Scripps Institution of Oceanography at the University of California San Diego have discovered that the growing loss of water is causing the entire western United States to rise up like an uncoiled spring.

Investigating ground positioning data from GPS stations throughout the west, Scripps researchers Adrian Borsa, Duncan Agnew, and Dan Cayan found that the water shortage is causing an “uplift” effect up to 15 millimeters (more than half an inch) in California’s mountains and on average four millimeters (0.15 of an inch) across the west.

From the GPS data, they estimate the water deficit at nearly 240 gigatons (62 trillion gallons of water), equivalent to a six-inch layer of water spread out over the entire western United States.

Results of the study, which was supported by the U.S. Geological Survey, appear in the August 21 online edition of the journal “Science.”

While examining data sets of ground positions from precise GPS stations within the National Science Foundation’s Plate Boundary Observatory and other networks, Borsa, a Scripps assistant research geophysicist, detected the same pattern over the 2003-2014 period.

All of the stations moved upwards in these recent years, coinciding with the time of the current drought, found Agnew, a Scripps Oceanography geophysics professor who specializes in studying earthquakes and their impact on shaping the earth’s crust.

Agnew says the GPS data can only be explained by rapid uplift of the tectonic plate upon which the western United States rests.

Agnew wants to assure the public that the uplift has “virtually no effect on the San Andreas fault” and therefore does not increase the risk of earthquakes.

For Cayan, a research meteorologist with Scripps and USGS, the results paint a new picture of the dire hydrological state of the west.

“These results quantify the amount of water mass lost in the past few years,” said Cayan. “It also represents a powerful new way to track water resources over a very large landscape. We can home in on the Sierra Nevada mountains and critical California snowpack.”

Cayan said, “These results demonstrate that this technique can be used to study changes in fresh water stocks in other regions around the world, if they have a network of GPS sensors.”